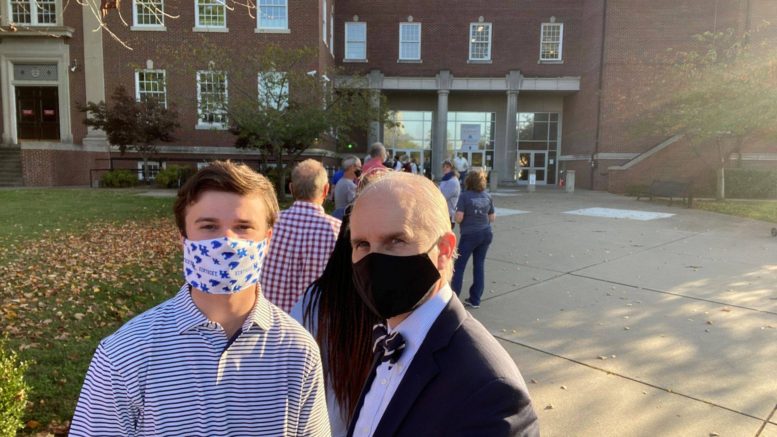 Alumnus Chris McNeill posted a picture of him and his son voting in McCracken County. (Photo courtesy of Chris McNeill from Court of Appeals’ Facebook page)

Winning 22 of the 24 counties, incumbent Chris McNeill will remain the judge of the Court of Appeals in the 1st Appellate District and 1st Division after defeating Jenny Hines.

McNeill said he is pleased to resume his role as the judge of the Court of Appeals.

“It’s gratifying that voters recognized my experience and commitment to the law,” McNeill said.

While not pleased with the overall results, Hines said she takes solace in that she ran a solid race and is grateful for those who voted for her. She said this won’t be the last time voters see her name on the ballot.

“I trust God and his timing,” Hines said. “I will hold my head high because we ran a very good race. Thank you to everyone I was able to meet and who supported my campaign. I hope to meet many more in the coming years. It was a close race and I’m grateful for the opportunity to run again in 2022.”

McNeill, a Fulton County native, graduated from Murray State with a bachelor’s degree in agriculture, and later completed a master’s degree in organizational communication.

The former Student Government Association president and student regent said his time at Murray State has played a huge part in helping him grow and get him to where he is today.

“Well, certainly the education I got at Murray State prepared my entire work life, including going to law school,” McNeill said. “Then on the other side of the coin, the contacts and the friends I made while attending Murray State include people that I am close friends with even to this day and it includes friends that helped me greatly in this election in multiple counties across the district.”

After graduating from Murray State, he attended Salmon P. Chase College of Law at Northern Kentucky University, where he also worked for the Office of Inspector General.

In practicing law for over 20 years, McNeill has served as a staff attorney for the Kentucky Court of Appeals and has been the directing attorney of the Paducah office of the Department of Public Advocacy for the past 16 years.

In April 2020, Gov. Andy Beshear appointed McNeill to the judge of the Court of Appeals for the 1st Appellate District, where he will continue to serve following his election.

With the victory, citizens can expect a hard-working judge hoping to continue to put his experience practicing law to work.

“I am committed to following the letter of the law,” McNeill said. “I know that is the job of the legislature to make the law. The job of the judge is limited to interpreting it and applying law. It is not the judge’s job to make law from the bench.”