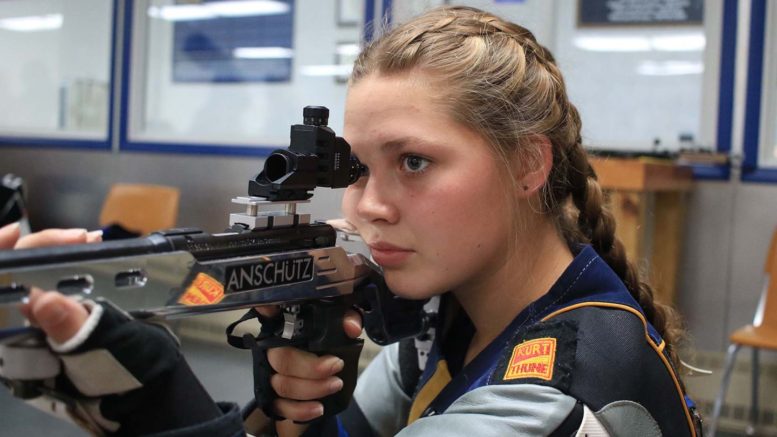 Following the abrupt end to the 2020 season, Murray State rifle boasts a young roster with high hopes for the upcoming season that was in question weeks ago.

The Racers shot a season-high aggregate of 4685 to qualify for the NCAA Rifle Championship in February. As they prepared to compete on the biggest stage, the COVID-19 pandemic hit and led to the cancellation of the season.

Fast forward to the summer of 2020 and their upcoming season was in question as well. However, as other sports were postponed, Head Coach Alan Lollar and his crew waited for an announcement and finally got it in early August.

They were handed the guidelines from the NCAA in how to handle the season amid the pandemic and got to work.

The team has to wipe down the tables before putting their gear out, limit the number of people in their team room and wear a mask while shooting.

With these guidelines in mind, the Racers started training in the middle of August and while the season was already going to look much different, so was their roster.

Key contributors Meike Drewell and Shelby Huber graduated after last season came to a close, leaving Murray State with a much younger roster.

While this is a big blow, Lollar said the team is merely reconfiguring rather than rebuilding thanks to the talent they have on this young roster.

“You don’t replace people like Shelby and Meike, the leaders that they were and everything,” Lollar said. “Every year it’s a different chemistry experiment if you will, you know you’re trying to make it work with different elements.”

With 11 players on the roster, only three are upperclassmen and along with five of the eight underclassmen being freshman.

Given that COVID-19 guidelines have also affected practice, it has presented even more challenges for the young team. Murray State doesn’t have full team practices often in order to minimize close contact as much as possible, so creating team chemistry has been a challenge.

“It does affect the team part of it,” Lollar said. “Because part of being a team is actually being together and they’re not together as often doing things and getting to know each other as it might’ve been.”

However, Lollar feels that the few upperclassmen have been solid leaders for their new teammates despite them facing a new environment because of the pandemic as well.

“I think our upperclassmen have done a good job of making them feel part of it and probably going a little farther than they might have on a normal time just to make sure that they were as comfortable as they could be,” Lollar said. “Because as bad as it is for the upperclassmen, the freshmen are in a new environment that is hopefully a one-year environment that is all screwed up for the most part.”

In their first match, the work Murray State rifle put in showed as they defeated UT Martin 4633-4577 on the road.

Freshman Scott Patterson led all scorers with an aggregate score of 1162 while freshmen Emily Endecott and Kylie Delany followed with scores of 1161 and 1159, respectively.

After waiting throughout the off-season and then the short period of training before the start of the season, Endecott was thrilled to get to the range and shoot.

“Last week was our first match and all the way up until then we didn’t know if we would actually have a season or not,” Endecott said. “So to be able to shoot that match last weekend [was great] because it basically told us yes we’re going to have a season and all of our hard work was going to pay off.”

Endecott admitted to some pre-game jitters, but felt good about her performance after relaxing prior to shooting and is already looking to improve before the Racers next match.

“It was a little stressful to start out with,” Endecott said. “I got a little nervous before the match started, but once we actually got to get on the line to shoot I calmed down and it was really fun. I know a few things we have to improve on. Each person has to improve by at least one point a week to get to where we want to be and I think our team is good enough to get there.”

After a long off-season in which they couldn’t train with practice facilities closed and the inability to do much over the summer, Lollar was excited to see his players compete.

Considering how the off-season went and such a young team having so little time to get prepared, he was pleased with how they performed against the Skyhawks.

“I was really proud of them,” Lollar said. “It was a match where we took our underclassmen down and I wanted to see how they would compete and how they would react to the match pressure. We were able to do that and they were able to perform to a level that got us the win.”

Lollar said the best way to see if training is paying off is to turn the lights on and play and his team stepped up to the challenge.

With their first win under their belt, the Racers have some takeaways from the match and are ready to take that knowledge and build off their solid season-opening performance.

“The way we look at it is every match we’re trying to learn something for the next match,” Lollar said. “If we can build on that and adjust our training to what we need to do, then by the end of the year we have a chance to be pretty good.”

With that in mind, Lollar and company have one goal for the foreseeable future—an NCAA title.

Murray State rifle will compete in its second match of the season at 9 a.m. on Friday, Oct. 9, as they host Morehead State University at Pat Spurgeon Rifle Range.

Rough first half ails Racers in matchup with Samford