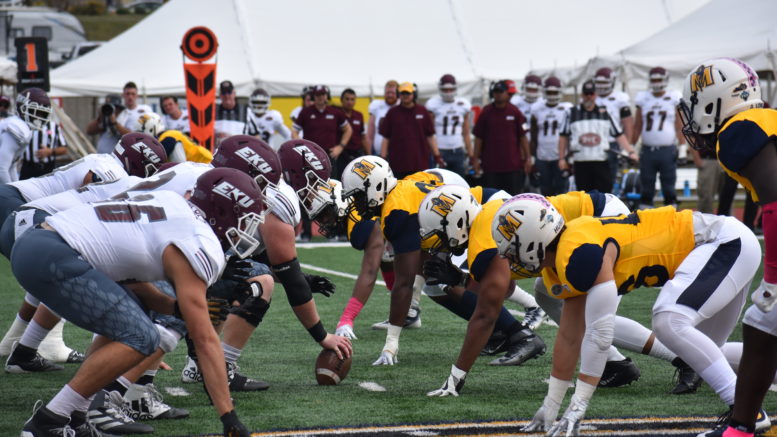 The Murray State defense lines up against EKU before a play. (Photo courtesy of Lauren Morgan/TheNews)

Months after the postponement of the 2020-21 football season to the spring, Murray State has released its schedule as well as the rest of the OVC.

The schedule consists of seven games, all against OVC opponents. As of Oct. 7, the Racers do not have any non-conference games on their 2020-21 slate.

Of the seven games, four will be played at Roy Stewart Stadium and they will hit the road for the other three on the schedule. Times are not yet released for these games.

The Racers will open the season on the road, taking on SEMO on Feb. 21. Murray State will then return home a week later to battle on the gridiron with UT Martin on Feb. 28.

After about a week and a half off, the Racers will travel to Cookeville, Tennessee, to take on Tennessee Tech on March 14. Murray State will then return for back-to-back home games, taking on Tennessee State on March 21 and EIU on March 28.

The Racers will take on Austin Peay in a Battle of the Border matchup on April 3 while closing out the regular season on April 11 against Jacksonville State.

Athletic Director Kevin Saal thanked the coaches and players for anxiously awaiting a schedule announcement and said he is excited to see the Racers compete in front of their fans at Roy Stewart Stadium.

“It is with great excitement and anticipation that we announce our upcoming football schedule,” Saal said. “I want to thank our student-athletes, Coach Hood and his staff for their patience, persistent preparation and commitment to Murray State despite challenging circumstances. We look forward to playing four home games and competing for an OVC Championship in front of Racer Nation at Stewart Stadium this spring.”

Newly-hired Head Coach Dean Hood also voiced his excitement, saying he and his team are ready to compete.

“We are excited about this schedule and are looking forward to the football season,” Hood said. “We are appreciative to everyone that has worked so hard to put us in position to play, while keeping our players and staff safe. The vision of running onto the field at Stewart Stadium and seeing Racer One run around the track has kept us going during these trying times.”