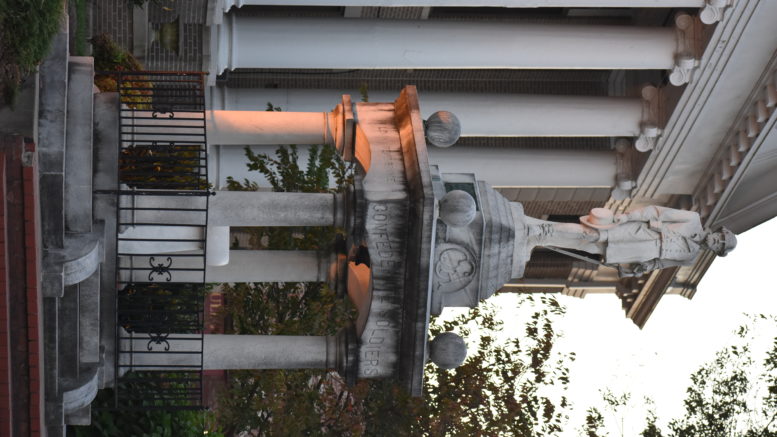 Faculty Senate and Staff Congress plan to work on a joint resolution in support of the relocation of the monument. (Gage Johnson/The News)

On Tuesday, Oct. 6, Murray State Faculty Senate met and discussed a resolution regarding the relocation of the Confederate Monument of Robert E. Lee.

It is currently in a 30-day drafting period where faculty senators are able to submit suggested revisions. Afterwards, the Executive Committee will finalize a draft. Since it is a Joint Resolution, the document will go to the Staff Congress next.

The Faculty Senate will vote on the finalized version of the resolution on Nov. 10. If it passes, a letter including the resolution will be sent to the Fiscal Court.

Professor David Roach, president and chair of the Executive Committee, said the need for a resolution supporting the relocation of the statue was brought forth this past summer after push from assistant coach Sherman Neal.

“The idea of a resolution started with faculty expressing the need for a statement supporting the relocation originating from coach Sherman Neal’s efforts this past summer,” Roach said. “The Senate took a straw poll at our last meeting which resulted in a decision to move forward with some statement in support of the relocation of the statue.”

Janice Super, assistant professor in the department of management, marketing and business administration, made an anonymous poll and sent it to her department to gather opinions from other faculty members.

“It was about 50-50,” Super said. “Half the people in my department thought that the faculty senate should not do anything and take no position and then half were in support of the resolution, so it was interesting.”

Super said she made an area where faculty members could voice other ideas along with the poll as well.

Another poll was made for the global language and theatre arts department and the results were 100 percent in favor of advocating for the relocation of the monument.

Roach said President Bob Jackson and the Board of Regents have also voiced for their support for the relocation of the statue in the past.

“President Jackson and the Board Regents have made prior statements in support of the relocation of the Statue,” Roach said. “The University supports the autonomous action of the Faculty Senate to make statements that ‘promote the growth and general welfare of the university’ (Faculty Handbook, 1.4.2.1 Faculty Senate Constitution) as part of the shared governance structure.”

Roach said with this resolution, his ultimate goal is to have the statute relocated from where it currently resides at the corner of the courthouse square.

“Speaking as a faculty member, my hope is that this resolution and other similar statements already made will result in the relocation of the statue to a more appropriate location that still honors the soldiers of Calloway County but removes the imbalanced elevation of the confederate cause in our community,” Roach said.

The Faculty Senate will meet virtually on Nov. 10 and decide on if the resolution will pass and be sent to the Calloway County Fiscal Court.

And so they marched

From redshirt to starting QB: Rice looks to lead by example