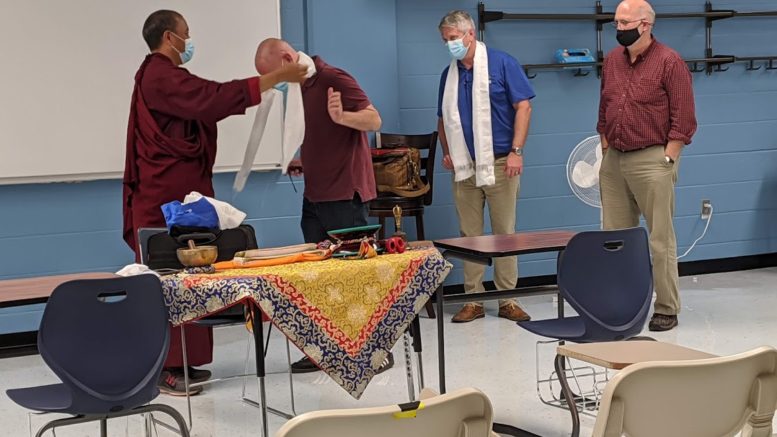 Phuntsok has been a Tibetan Buddhist monk for 34 years and has been visiting Murray State for 11 years. He works and resides in Dharamsala, India, the exiled home of the Dalai Lama. Phuntsok is an instructor in the monastery where he trained and worked on projects to help Tibetan refugees.

In the last few years, he has also acted as a guide for students who come to Dharamsala to volunteer with local non governmental agencies to improve the lives of Tibetan refugees.

He partners with American universities for study abroad opportunities and to advocate for Tibetan people in exile. Phuntsok also speaks at various universities in the U.S. and Europe. 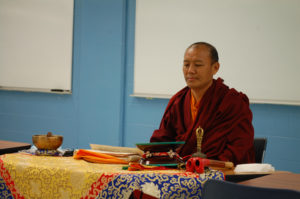 Phuntsok began his speech with a short healing ritual. It consisted of a chant as well as the use of many spiritual objects. Phuntsok said the type of healing the ritual focuses on is called Chöd.

He said these spiritual poisons, along with hatred and anger, need to be shed to gain wisdom. All of the other poisons stem from ignorance.

“There are 84,000 poisons within us and Buddha focused on taking these out through chantings, meditations, mantras and all different kinds of practices,” Phuntsok said.

Phuntsok spoke about the Buddhist perspective of compassion. He said everyone, regardless of their religious views or lack thereof, practices limited compassion in different ways. Phuntsok added that animals and perhaps even spirits practice compassion in the same manner.

“Buddha introduced that we can practice compassion in an unlimited way,” Phuntsok said. “He said that genuine compassion is practiced without bias. This is the bigger compassion.” 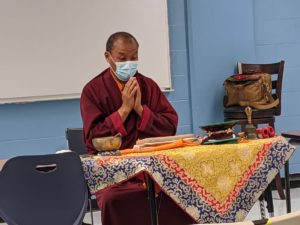 He talked about a story in Buddhist scripture that demonstrates this supreme compassion. Phuntsok said a former life of Buddha gave his body to feed a starving mother tiger with five cubs. The mother tiger was too weak to eat him and Buddha had to scratch himself with a branch so the tiger could lick up his blood. Phuntsok said this is a very uncommon compassion that has no ego.

Phuntsok also mentioned his observances of compassion in the modern day. He talked about young climate activist Greta Thunberg as an example of a single person making change in the world. He also spoke about the importance of people showing compassion for animals and their suffering.

Phuntsok pointed out the Buddhist notion of compassion to the sun. Just as the sun shines on everyone without bias, people should act with compassion in the same unwavering manner.

Phuntsok talked about the different functions of monks in monasteries. While the chant he performed only lasted minutes, he said there are chants that last weeks or even months. He explained that there are ritual sections of the monastery that spend the whole day chanting.

“In our monastery they wake up at five in the morning. They are chanting a lot. They also go into the village as a social worker when there is physical or mental sickness to heal and perform blessings,” Phuntsok said.

It is clear from Phuntsok’s speech that compassion plays a crucial role in Buddhism. However, its importance in the world transcends any single religion or belief.

The dignity of man