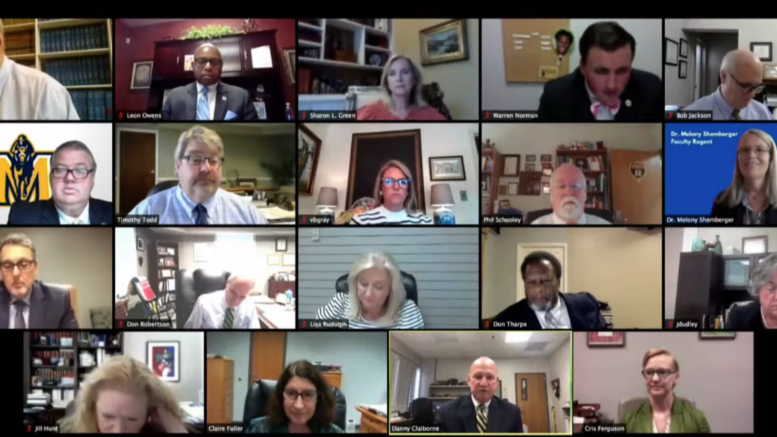 The Board of Regents meets on Friday, Aug. 28 via Zoom to discuss the new semester. (Photo courtesy of the Murray State University’s Youtube Channel)

The Board of Regents held its summer quarterly meeting on Friday, Aug. 28, via Zoom to discuss topics including enrollment, finances and student affairs.

Don Robertson, vice president of Student Affairs, spoke highly of the enrollment rates for the fall 2020 semester. He credited Wendy Cain, director of Student Financial Services, and her colleagues for assisting incoming students with their financial aid and various situations.

Robertson said the most common reason for students not returning to school is their inability to afford their upcoming semesters. He said because Cain and the rest of her staff have been working diligently since the semester began, the University is able to greatly mitigate the rate of students not returning.

Robertson also said faculty and staff continued to work on maximising recruiting efforts despite the complications that COVID-19 caused.

Murray State will not receive any performance funding dollars. Despite contributing $827,600 and leading other public universities in Kentucky in graduation rates, only the University of Louisville and the University of Kentucky will receive funds. There have been discussions by the Postsecondary Performance Funding Work Group on changing the system that allocates where the funding goes.

Discussion occurred regarding the state pension crisis for Murray State. Currently, the Kentucky General Assembly froze the rate of contribution that Murray State pays into the pension fund at 49.47 percent. The rate could have risen much higher if the freeze hadn’t been placed.

The Board of Regents will have to decide in a later meeting if they will continue to be a part of the Kentucky Employee Retirement System non-hazardous plan or look into other options.

Jackie Dudley, vice president of Finance and Administration, spoke of the liability that Murray State has under the current system. She said while an exact dollar amount could not be figured at the time, she believes Murray State will be liable for almost $200 million.

With aging infrastructure, the Board voted to replace two boilers in the Curris Center and replace the windows and doors in Wilson Hall and Wells Hall. The Asset Preservation Fund is expected to generate $1.4 million but overall expenses are expected to be closer to $2 million. This fund is student generated. $10 is taken from every credit hour a student enrolls in and is capped at 15 credit hours per student.

The School of Engineering, formerly known as the Institute of Engineering, has received a name change with a 10-0 unanimous vote from the Board. The engineering and physics programs were specifically mentioned and have doubled in size over the course of eight years.

During the spring 2020 semester, Warren Norman was elected Student Government Association president by his peers. This position also makes him the student regent for the 2020-21 school year. He was sworn in by Judge Jamie Jameson, the circuit court judge for Calloway and Marshall counties.

Norman is a senior agribusiness major from Henderson, Kentucky. He won homecoming king last year and said it was one of his proudest moments during his introduction to his fellow regents.

“We are gonna be able to help over 300 patients,” Norman said.

The Red Cross said the amount of blood donated nearly doubled their expectations.

Click here for the full live stream of the Board’s meeting. The Board of Regents will meet again on Dec. 4.

Board of Regents approves increases

Teachers are rightfully taking a stand