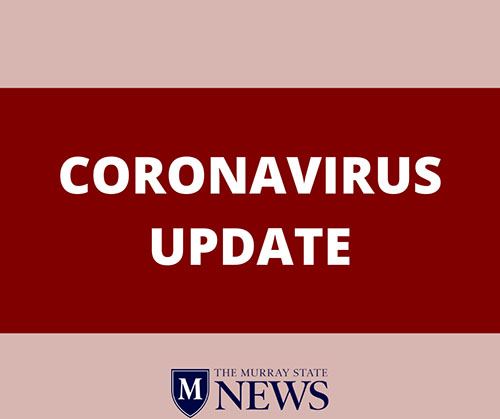 Fourteen students and four faculty members at Murray State have tested positive for COVID-19 since Aug. 1.

On Wednesday, Aug. 1, Bob Jackson, president of Murray State, sent out an email alerting the campus community of COVID-19 reporting changes to all students and faculty, including the current count of positive cases.

Prior to this announcement, the campus community was included in the overall count of positive cases in Calloway County, which was released daily by the health department.

The News reached out to Gov. Andy Beshear’s office today prior to the University’s announcement regarding the state requirements for postsecondary institutions reporting positive cases.

“Colleges and universities as with other institutions from K-12 education to long-term care facilities, will be required to notify the school community about new cases,” the Beshear Administration said in an email to The News. “The KDPH will publish case reports for higher education, just as it does for long-term care reports.”

On Tuesday, Aug. 18, Beshear along with Dr. Steven Stack, Kentucky’s chief public health officer, announced that the state was working on a reporting system for K-12 schools.

“I talk with Dr. Stack, along with my other university colleagues, on a regular basis.,” Jackson said. “Due to this change in guidance, we will be reporting positive case information on a weekly basis.  At the same time, we will continue to protect individual health information privacy and concerns of our students, faculty and staff.”

Jackson said that he is in constant communication with the Calloway County Health Department who handles all cases and contact tracing.

“Nothing about this semester will be easy,” Jackson said. “It will take all of us, working together, to have a good, safe and healthy semester.”

Beshear’s administration also said that their current plan is to not publicly list names, ages or genders of positive cases matched to a school, but to report the overall positive number of cases involving students, faculty and staff.

In a press conference this evening, Beshear said that they are going to begin tracking COVID-19 cases based on individual universities.

“Students and parents of those students at universities and the faculty deserve to know overall the number of cases,” Beshear said.

He also noted that his administration would look at the positive cases to determine if they are clustered groups that could be effectively quarantined to resolve the issue or if it is a wider community spread.

In the Aug. 18 press conference, Beshear showed a slide that displayed the counties in Kentucky that are considered “red zones” by the White House for Aug. 8 through Aug. 14, meaning there is a 10 percent or higher positivity rate. Calloway County was among the 20 counties listed, and only one of three counties listed from Western Kentucky.

In an email to the campus community earlier in the day, Jackson reminded students of Beshear’s Executive Order regarding non-university sponsored social gatherings, including off-campus gatherings, parties and events, were limited to ten or less.

“This guidance is vitally important, along with our Racer Restart initiatives,” Jackson said. “We need your help. Use good judgement. Make good choices. Bad decisions can have far-reaching effects.”

Jackson briefly mentioned he was concerned with some activities that were happening off-campus, after hours, but did not elaborate.

Anyone can report non-compliance to the University through msu.racersafeandhealthy@murraystate.edu. Jackson also encouraged the campus community to watch this video regarding the 12 Racer Safe and Healthy guidelines.

“Importantly, several universities have discontinued or suspended on-campus teaching and learning this week,” Jackson said. “Let’s do our part to have a good, safe and healthy semester.”

Racers back on track with 4-0 weekend