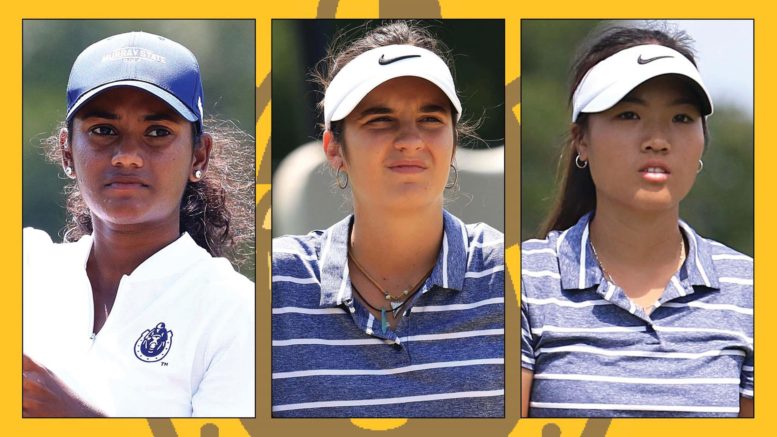 Despite the season being cut short, three Racers were awarded All-OVC honors in women’s golf on Tuesday, May 19.

Freshmen Ana Garcia Picchi and Eliza Mae Kho, along with senior Raeysha Surendran all found a way to make their mark on the leaderboards in the short spring season.

Surendran capped off her career at Murray State with an OVC-high 74.4 stroke average, earning her a spot on the All-OVC First Team.

Head Coach Velvet Milkman was proud of her senior leader for an incredible capstone season.

“She has worked hard and improved every year while at Murray,” Milkman said. “It is nice to see all her hard work be rewarded. She had a tremendous year leading the OVC in stroke average, and she reached several goals, including winning a tournament individually. She had a very good year with consistent play, and is very deserving of this recognition.”

Both Picchi and Kho were in the top five in the OVC for scoring average among freshmen, averaging 78.3 and 78.7, respectively.

Picchi came out the gate strong in the fall and was named OVC Female Golfer of the Month in September 2019, in which she achieved a scoring average of 73.8.

“Ana made an immediate impact on our team from day one,” Milkman said. “She had a very good fall season and showed that she is a very talented player. She has the ability to be very good and it will be fun to see what she accomplishes in her career as a Racers.”

Milkman was pleased not only with Kho’s powerful start at the collegiate level, but also the improvement she has made since her arrival at Murray State.

“It’s rewarding to coach a player who wants to learn, improve, and is very proud to be a Racer,” Milkman said. “She improved tremendously from the fall to spring season to achieve her goals.”

Milkman said she looks forward to watching the two outstanding freshmen continue to improve throughout their careers on the golf course.