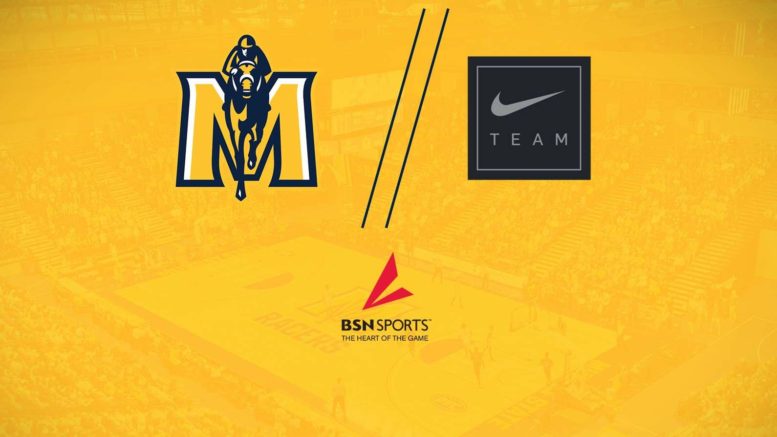 On Friday, May 8, Murray State University Athletics announced a 5-year deal with Nike and BSN Sports.

The agreement resulted in a five-year commitment from BSN Sports to provide Murray State athletics with their practice and competition gear, as well as all athletic equipment. On the flipside, Nike will be the provider of every sports program’s competitive gear.

“This strategic partnership provides the finest apparel and athletic products to the benefit of each student-athlete representing the Racers,” Northrop said. “We are pleased that we can elevate their experience.”

Murray State Athletic Director Kevin Saal was also pleased with the arrangement, saying the deal is beneficial for us for a lot of different reasons.”

“Financially, it allows for us to go to market with all of our purchases throughout the department; all the different sports and administrative units within athletics, as opposed to smaller purchases individually,” Saal said.

Saal said the bulk purchases allow for discounts, rebates, and allowances. He is convinced the arrangement will help boost Murray State’s image through the promotion of Nike’s brand, as the plan is to incorporate Nike’s equipment in each sport’s competitive gear.

“The goal is for all of our competitive gear to be Nike,” Saal said. “We will slowly transition our way towards that. Obviously, given the financial environment in this day and age with COVID-19, we will transition to that. We won’t just massively replace all of our uniforms that still have good life in them.”

Nike’s presence on the court and field will only be limited to sports such as Rifle, where Nike’s presence in the market is limited. However, Saal is confident BSN’s service will work with the university in finding other means of purchasing competitive gear.

Overall, Saal is happy with the arrangement, saying it was long overdue. Murray State Saal is confident in the opportunities the new partnership deal will provide, claiming that the service through BSN will be second to none.

“They’re committed to our success, both academically and athletically,” Saal said. “Portions of that contract stipulate that there are some bonus incentives for gear regarding academic and athletic achievements.”

Fields hopes to earn another title