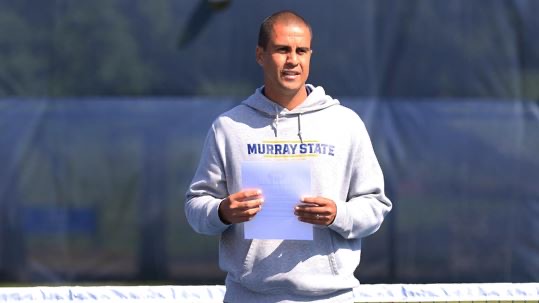 Before the Murray State women’s tennis season was cut short because of the COVID-19 pandemic, the Racers were 8-5 overall and were looking to bounce back heading into OVC play after going 1-4 in their last five matches.

With the season being canceled prematurely, seniors Claire Chang, Anja Loncarevic and Sara Loncarevic may have another year of eligibility depending on whether the University chooses to do so. Nevertheless, Head Coach Jorge Caetano added Annika Pschorr, Paola Campigotto, Sarah Bureau and Gabrielle Geolier to the roster for the 2020-21 season.

Pschorr comes to Murray State from the University of Regensburg in Regensburg, Germany, as a junior transfer.

Traveling over 7,600 miles from her native city, Pschorr told goracers.com she chose Murray State after talking with Caetano about the expectations he has for the team this upcoming season and because of the family-like atmosphere the University brings.

“[Caetano] was very friendly and positive and his ideas completely match my expectations,” Pschorr said. “Plus, from what I have seen, the team has a great spirit and has become like a second family for the girls. That was what I was looking for.”

By the end of her Racer career, Pschorr said she expects to enjoy her time at Murray State and wants to find success on the court and in the classroom as well.

“What I expect from my career as a student-athlete at Murray State is an incredible time where we are going to make amazing memories as a team, and are able to reach our full potential both on the court and in the classroom through hard work and a great atmosphere,” Pschorr said to goracers.com.

“Annika will bring experience to this recruiting class as she will be transferring as a junior,” Caetano said to goracers.com. “She is a great athlete with great hands, and she has achieved great results in the competitive German tennis league throughout her career. Her game is very polished, and she is a superb doubles player. I believe she will be able to make a huge impact in both our singles and doubles lineups from day one.”

The Joinsville, Brazil, native competed in only a few events, but because of her impressive play in those events, she was ranked as high as 1,306 in the world junior ranking by the International Tennis Federation.

Caetano told goracers.com that Campigotto’s potential is very high and that she could thrive at Murray State when she acclimates herself.

“[Campigotto] moves extremely well on the court, and she is not afraid of going for her shots,” Caetano said. “She can strike and hit a winner at any moment from both wings and, even though she grew up playing on slow clay courts, I believe her game is perfect for fast hard courts. Once she is 100 percent adapted, we will see her game achieve great heights.”

Campigotto told goracers.com she believes Murray State is the right school for her because “it seems to be a place where I can improve myself both in tennis and academics, and because it feels like a welcoming place where I will adapt easily.”

Hailing from Nieul-sur-Mer, France, Bureau will travel nearly 7,000 miles from her native town to arrive in Murray.

Bureau is an incoming freshman who played for Lagord Tennis & Squash Club, where she was named the UNSS France Doubles Champion along with being the runner-up and finishing third in the UNSS France Singles competitions.

“I chose Murray State because it suited me in every way,” Bureau said. “I felt a real team chemistry between the girls, and a really good team spirit. I also had a great feeling about Coach Caetano, which is very important to me. I immediately felt like MSU was the perfect fit for me.”

Caetano told goracers.com that Bureau’s undeniable skill will prove valuable for the Racers next season and beyond.

“What impressed me the most about Sarah’s game, is how effortless she makes it look when she is playing because of her natural ability to change the direction of the ball,” Caetano said. “She makes her opponents uncomfortable with her good hands and great feel for the ball. She is not afraid of going to the net, which adds a lot of versatility to her game, and her addition will bring a lot of depth to our lineup.”

Geolier comes to Murray State from Blainville, Canada, and will look to carry over her successful junior career into college play.

Ranked as high as 2,099 in the ITF world junior rankings, Geolier has found success, particularly in the 2019 Indoor Junior National Championships, where she finished as a semifinalist.

Geolier chose Murray State because of the family-like atmosphere along with the coaching staff and the nice facilities the University offers.

“I chose Murray State because I really like the way each student is treated like a person rather than a number,” Geolier said. “As a student, I feel that I will be part of a big family and will always have help if I am in need. I expect my tennis career to be at its best [because] I will be able to work hard in the gym and on the courts because of the good facilities and great staff that will be helping me to get better.”

Caetano told goracers.com that Geolier’s skillset will immediately translate to college but believes her best tennis is ahead.

“Gabrielle can play from the back, but can also step in and take the ball early which gives her opponents a lot of trouble,” Caetano said. “She has a beautiful net game, which will help us a lot in doubles, even though her best results came in singles. She is one of the highest ranked junior players in Canada and, even though she has a well-accomplished junior career, I believe her best tennis is still ahead of her.”

Racers to compete in Gulf Coast Showcase on Thanksgiving week