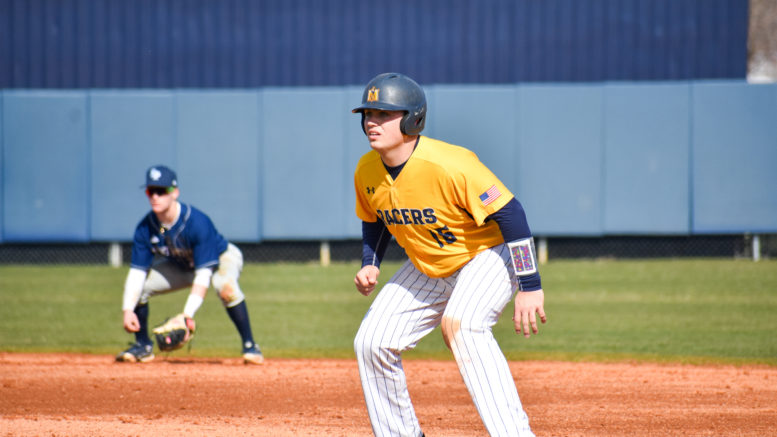 Senior catcher Bryan Chilton watches the pitch while on base. (Photo by Jillian Rush/The News)

Head Coach Dan Skirka was disappointed with the 2-1 loss, admitting his team didn’t play to its fullest potential.

“It was a very close, competitive game, which is kind of what we expect every time we play Carbondale,” Skirka said. “We just pitched them into too many rallies and gave them opportunities, and then we couldn’t cash in on our opportunities.”

Redshirt senior Joe Ivey took the mound to start for the Racers, pitching four innings. He allowed three hits and one run off a double in the third inning.

“Joe competed and did a great job for us,” Skirka said. “[That’s] what we expect from a senior. He’s going to go out, throw strikes and compete. He had us in a position to win when he came out of the game, and that’s what we ask from our starters.”

Redshirt freshman Jacob Pennington threw 2.2 innings. He walked four and struck out two before surrendering the mound to redshirt junior Braydon Cook, who walked one Saluki before allowing the go-ahead run on a wild pitch in the bottom of the eighth inning. Junior Carter Poiry came in to get the last two outs of the eighth, but the damage was already done.

Skirka said the abundance of walks issued by Racer pitching made it easier for the Salukis to get by. On the flipside, hitting never came at the right time. The Racers outhit the Salukis 7-3, but the Racers didn’t take full advantage with runners on base.

Junior infielder Bryson Bloomer had a good day at the plate, going 3-4. Senior Catcher Bryan Chilton was the only other player with multiple hits, going 2-3.

Looking back on the game, Skirka mentioned the lack of availability of runners on the basepaths early on in most innings.

“We’ve just got to do a better job of getting our leadoff hitter on base,” Skirka said. “Two out of nine innings were the only times we got our leadoff guy on. That’ll be our focus going into the weekend against Bowling Green: getting that leadoff guy on and putting the pressure on them.”

The Racers hope to bounce back against Bowling Green University at 3 p.m. on Friday, Feb. 28, at Reagan Field the first game of a three-game series.

Racers on a roll