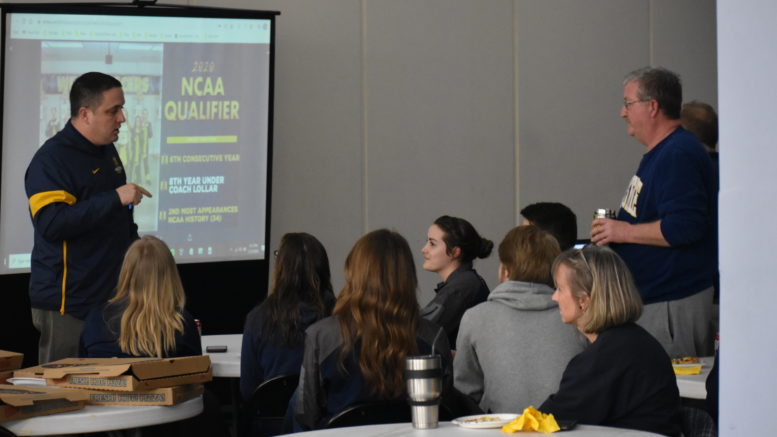 After the selection show came to a close on Feb. 25, it was confirmed that Murray State Rifle will make the trip to Lexington, Kentucky for its sixth straight trip to the NCAA Rifle Championships.

The team that was on the outside looking in a few matches ago found themselves right back in the competition by putting up two season-best aggregate scores in the last two matches against Jacksonville State and the University of Nebraska.

After struggling early, Head Coach Adam Lollar was happy to see that his team picked the pace back up and were able to recover, earning a spot in the championships.

“Our goal at the start of the year is to be able to play on the last day,” Lollar said. “If you can make it to the last day of the season, then we got a chance to win it all.”

Losing six All-Americans over the last two years has been rough for Lollar, but he has been proud of the fight this team has been showing and believes that they have no idea how far they can go.

“They never got discouraged when it was tough,” Lollar said. “I have seen them getting better over the last six weeks of the spring and just when they needed to. This is one of the few teams I’ve had at this time of the year that is getting better.”

Making their sixth consecutive appearance is a big deal for senior Meike Drewell. Carrying on the tradition of winning for Racer rifle means the world to her and the rest of the squad.

“I think it’s going to be similar to last year,” Drewell said. “We know what it feels like, we know exactly what we’re capable of and we know that we can line up with any team that shows up. We’re going to give them a run for their money because we know we have that confidence.”

After hearing the team’s name in the selection show and knowing how far the team has come, Drewell is ecstatic for the tournament.

“People might be surprised, especially after the season that we had,” Drewell said. “We’re not surprised at all because this is exactly how we’ve been training all year. We’re excited that we get the chance to play on the last day and show everyone just what we’re capable of.”

Freshman Matias Kiuru has been an x-factor for Murray State by recording some high individual scores, including his career bests of 588 in smallbore and 596 in air rifle against Jacksonville State. The Helsinki, Finland, native is looking to keep up the excellence to help the team in the tournament.

“I’ve been training hard for many years now,” Kiuru said. “There are still some points left for me to take going to the NCAA, so I can definitely do even better. There’s no doubt about that.”

Lollar hopes to go all the way, but he knows that the competition this year is heavy so the Racers will have to continue to bring the fight he knows they have.

The tournament starts on March 13 with smallbore and ends with air rifle on March 14.

Golf one shot off lead at Drake Creek