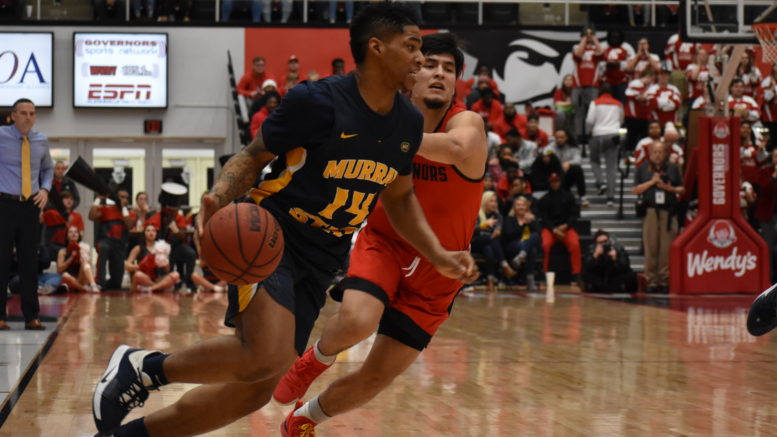 With eight seconds left to play sophomore guard Tevin Brown missed a three in what seemed to be the Racers final hope, until an attempt to run out the clock almost turned into a Murray State three and overtime in the Dunn Center.

Redshirt freshman guard DaQuan Smith intercepted a loose ball and heaved up a prayer from three after junior forward Eli Abaev grabbed his 11th rebound and chucked the ball towards halfcourt looking to run off the five seconds remaining, but it clanked off the rim giving Austin Peay the 71-68 victory.

Murray State men’s basketball had done everything they could to get a win and came close with multiple big plays falling short.

Down 69-68 with 37 seconds left, senior forward Anthony Smith got the ball out of a Murray State timeout and attacked the rim after a play broke down. He was blocked by Abaev, giving the ball back to the Governors and allowing them to go up 71-68 after two free throws.

Smith said he doesn’t regret taking it to the basket, but feels a little shortchanged in how it went down.

“The play was to swing the ball to Tevin and try to [give him] a screen and they were denying him so I saw the lane and decided to take it,” Anthony said. “Whether it was a good call [or] a bad call, I just made the choice to drive it.”

The Brown three-point attempt was similar, as it seemed that the play broke down and he created his own shot, but Head Coach Matt McMahon didn’t mind the shot.

“We slipped a ball screen there,” McMahon said. “He’s one of the elite shooters in all of college basketball. He’s very good at creating separation and I thought he got square to the goal and got a good look at it. I’ll take him shooting that every time.”

While, McMahon does wish that they could’ve ran the play a little better than it had turned out, he felt that the Racers gave it their all.

“I thought it was a hard fought game,” McMahon said. “Both teams competed at a high level. We fought back when we were down eight there and gave ourselves a chance to win, I just wish we could get that last possession back and execute better.”

It was a back-and-forth affair of extreme fashion, with multiple scoreless streaks for both sides and the largest lead sitting at eight points for the Governors as the Racers did a lot of things right.

Murray State shot 48% from the field and 36% from beyond the arc and had five players finish in double figures, with senior guard Jaiveon Eaves leading all scorers with 21 points.

And while it was expected for junior guard Terry Taylor to get his own as one of the premier players in the conference, Anthony made him take difficult shots to get his 16 points and 14 rebounds on 8-for-18 shooting.

“I did all I could,” Anthony Smith said. “Taylor is a great player. I put him in some tough positions and he just found a way to make the basket. I know I’m not going to make him miss everything, but my mindset coming into the game was to make it harder on him each possession. I just know in the back of my head it wasn’t easy at all for him.”

McMahon was also pleased with how they kept Taylor off the offensive glass.

“He’s a terrific player,” McMahon said. “I thought our guys really competed down there in the post and made his shots difficult. When you can hold him to 16 points on 18 shots you’ve done an outstanding job and he averages almost five offensive rebounds and a game and we held him to two.”

The Governors second-leading scorer freshman guard Jordyn Adams also poured in 20 points on 5-for-14 shooting, while knocking down 8-for-9 from the charity stripe.

The team defense as a whole was solid, holding the Governors to 37% shooting in the second half from the field and a dismal 3-for-18 from downtown in the game.

However, the nine second chance points and the 14 turnovers that led to 14 points for Austin Peay came back to bite the Racers.

“We defended well enough to win,” McMahon said. “Our first-shot defense was really good [but] we got hurt on the glass on some second shot opportunities. [Then] points off of turnovers and then I think you can look back at the free throw line as a key to them getting the win.”

Turnovers have been a recurring issue as of late for Murray State, with the team averaging 15.5 tpg over the last four games.

Murray State moves to 18-7 overall, while being tied for first place in the OVC with Austin Peay at 11-2 in conference play.

The Racers now have a day to prepare for its lone matchup of the season with Morehead State at 4 p.m. on Saturday, Feb. 15, at the CFSB Center.

“We’ll get back to it tomorrow,” McMahon said. “We got a quick turnaround getting back late tonight and get ready to go for Morehead State on Saturday. Hopefully we’ll have a great crowd and our guys will be ready to go.”