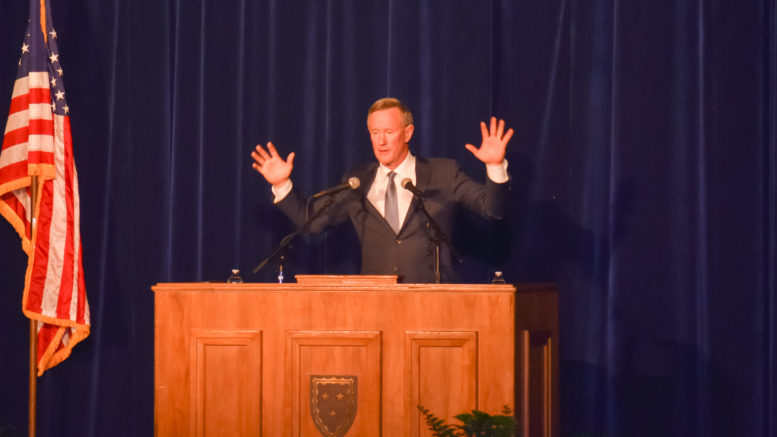 On Thursday, Feb. 13, Admiral William H. McRaven reflected on his father’s time at Murray State and his 37 years of service for the United States as a guest speaker at a news conference, as well as the Presidential Lecture.

McRaven spoke primarily on his father—Claude McRaven—who used to attend the University. Throughout his childhood, McRaven would hear about Murray as though it were the foundation of his father’s adult life.

“Growing up, my father used to talk about Murray State as though it were hallowed ground,” McRaven said.

McRaven’s father was heavily involved in sports including baseball, football, basketball and track and field. Claude McRaven was also inducted into the Murray State Hall of Fame in 1975.

McRaven didn’t learn of his father’s feats of greatness until he found an old scrapbook. This Scrapbook contained newspaper clippings showing Claude McRaven’s victories as a Thoroughbred.

“I’m looking at this astounded… he didn’t tell me how successful he had been on the gridiron and on the basketball court,” McRaven said.

But what McRaven remembered above all when it came to the subject of Murray State, was his father’s love of education.

“He really impressed upon me and my two sisters a value in education,” McRaven said. “He said all he had to leave me and my sisters was an education.”

The stories Claude McRaven would tell about his time at Murray State were tales of learning and reverence for the University. McRaven explained that his dad was a very humble man.

McRaven continued saying it was surreal and emotional for him to come back to the building that his father spent most of his time studying in.

As the seats of Lovett Auditorium filled up, McRaven spoke about his life in special operations and his pronounced respect for his parents in his book Sea Stories at the Presidential Lecture Series.

“I hope what you find [in the book Sea Stories] is about the magnificent soldiers and marines that I had the opportunity to work within my thirty-seven years… it’s their story through my eyes,” McRaven said.

“I’m their biggest fans,” McRaven said with a smile. “This generation is in fact ‘the next great generation.’ They’re not like us, their music is different, they are hard workers, they are patriotic… they want to get things done, they have a great sense of friendship… they believe in making things happen.”

McRaven dedicated chapters in his book to honoring the generations who came before him and to the ones who fought afterward in World War II. Many of the chapters in Sea Stories describe the brutal training that SEALs have to pass in order to become a Navy SEAL.

In a separate chapter, McRaven describes a story of hope. He begins explaining how his class broke a vital rule and as a punishment the Vietnam Vet instructor made them sit for hours in extremely cold mud up to the men’s chins. The instructors then tried to entice the trainees out, saying if five of the men quit, then all of the men could come out of the mud.

He heard one man start to sing which caused all of the other men to lock arms and start singing. This made the instructors shout at them through bullhorns to quit.

“Hope is the most powerful force in the universe,” McRaven said. “You will all have the opportunity to give someone hope, never ever give that up.”