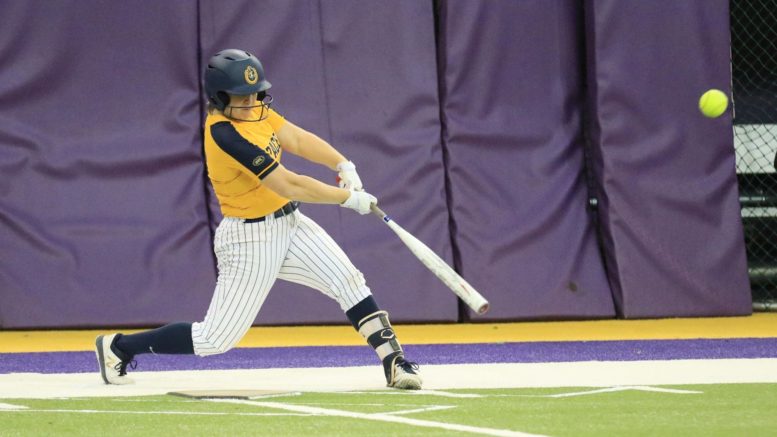 The Murray State Softball team wrapped up their first tournament of the season at the Doc Halverson UNI-Dome Classic.

The Racers went 3-2 over the weekend with victories against South Dakota State University in game one, the University of Northern Iowa in game two and a blowout in game five against Drake University.

Day one was an easy stroll for the Racers, as they won both games.

Sophomore infielder Lindsey Carroll picked up an RBI-triple in the third and put the Racers on the board first against the Panthers. In the bottom half of the inning, senior shortstop and 2019 Missouri Valley Player of the Year Sammy Bunch of Northern Iowa blasted one up and over center field, tying the game.

Murray State took the lead in the sixth inning on another RBI, this time from junior outfielder Logan Braundmeier, who drove in junior infielder Sierra Gilmore.

Gilmore also picked up an RBI-double, scoring Carroll and putting the game further out of reach for Northern Iowa.

Taylor Makowsky started in the circle this game and gave up four hits and struck out four batters. Freshman pitcher Jenna Veber finished out the sixth and seventh innings, recording her first save as a Racer.

Murray State played well, but failed to reproduce the success they managed the day before.

The University of South Dakota took the Racers to a 10-inning shocker that ended up in a 9-8 loss.

A first inning homer from the Coyotes gave them a lead that lasted up until the fourth inning. A good string of hits from multiple Racers put runners on base and they finished out the fourth inning with a 3-1 advantage.

The next inning, the Coyotes equalized the game on an RBI-double and exploited a Murray State error. The game went into extra innings.

Using the international tie-breaker method, South Dakota’s Dylan Underwood dropped a single out to left which drove in the game-winning run. Then the Coyotes retired the bottom half of the inning, striking out three Racers in a row and giving the Coyotes a 9-8 victory.

Murray State was the first to score in game four. Gilmore blasted another home run, this time a solo shot in the third inning. Sophomore Abby Shoulders hit a sacrifice fly that scored Braundmeier, giving the Racers the 2-0 lead.

Northern Iowa scored all seven runs in the fourth inning, including a two-run home run from Bunch, sealing their victory. The Racers never recovered.

The Racers ended on a good note with an 8-0 victory against Drake. Junior outfielder Jensen Striegel got the scoring started as she stole home off a wild pitch. Carroll put up an RBI-single in the fifth inning, giving Murray State another run.

Gilmore got an RBI-single to begin the sixth inning. With a three-run home run from Jones, the game became 7-0. Bleiberg and freshman Tyler Shemwell put the game away after getting back-to-back doubles and increasing the lead to 8-0.

James completed her second shutout of the season and only gave up three hits.

The win gave Head Coach Kara Amundson her 200th win. She’s ecstatic about the accolade but knows her players are the ones who made it possible.

“The win after yesterday was huge,” Amundson said. “To respond after two losses yesterday and come out with our bats going to town and Hannah James coming in and throwing a really good game is a huge deal for us moving forward.”

The Racers will compete next at the Lady Demon Classic where they will take on Northwestern State University at noon on Friday, Feb. 14,  in Natchitoches, Louisiana.