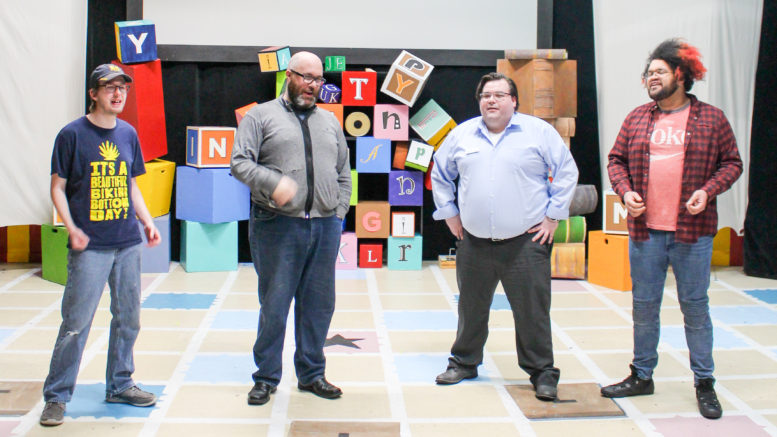 With Valentine’s Day right around the corner, the Pip-Squeaks, a quartet from Playhouse in the Park, have been warming up their vocals for their fourth annual Valentine’s Day serenading fundraiser.

The Pip-Squeaks, led by Brad Brauser, started this fundraising tradition in 2017 because of Brauser’s interest in barbershop quartets.

“I’ve always seen quartet groups on Facebook, and to my knowledge nothing like that has ever been done in Murray,” Brauser said.

Over the past three years that the Pip-Squeaks have sung to people on Valentine’s Day, they have received varying reactions.

“We sang for a woman one time who was quite embarrassed and after our first song she was ready for us to leave, but her significant other paid for two songs, so we just kept on going,” Brauser said.

Beyond embarrassing their customer’s partners during serenades, the Pip-Squeaks have even garnered crowds.

“One year we sang to someone who worked in the Walmart bakery,” Brauser said. “We stood in a busy Walmart singing love songs while people recorded us on their phones.”

The Valentine’s Day serenades started as a fundraiser for the Penguin Project, which is a program that allows special needs kids and those with physical disabilities to be cast in a junior Broadway show hosted by Playhouse in the Park.

From 2017 to 2020, the fundraiser has seen a few changes. Brauser and fellow quartet member Joshua Brower are the only original members. This year they have been joined by newcomers Joshua Byrne and Ian Ball.

All the members of the quartet play a big role in Playhouse in the Park. Brower has been a member of Playhouse since 2015.

“I fell in love with it immediately, and I have been coming back ever since my first show,” Brower said. “It’s important to me that the place stays open and that’s why I enjoy fundraising.”

This may be Byrne’s first year participating in the Valentine’s Day serenades, but he has sung with the quartet before and has been deeply involved with Playhouse.

“I have been a part of Playhouse since my sophomore year of high school, which was in 2003,” Byrne said. “I act, direct and I am also the secretary on the board of directors for Playhouse, so I am constantly involved.”

The newest member of  Playhouse in the quartet, Ball, has been a member since 2017. Even though he‘s been there for a short time, he has made major contributions and has been in the cast of many shows.

“I love the people here, the projects we do and the impact we have on the community,” Ball said. “I enjoy being able to give back even if it’s just a little bit.”

Lastly, the leader of the quartet, Brauser, first became aware of the Playhouse in 2006 and started being in their shows the same year.

This year’s fundraiser is for the nonprofit’s general operating budget which will help fund Playhouse’s recent growth.

“Playhouse has just bought a new building due to our growth in audience members, volunteers and show productions,” Byrne said.

Valentine’s Day is friday, Feb. 14, if you want to surprise your significant other with a song or two, contact Brad Brauser on Facebook or by email at bbrauser@gmail.com.

“This is not something we do for ourselves, but to instead raise money for something that is important to all of us, so we appreciate all of the support we can get,” Brauser said.

By the numbers: What to know before Murray State battles Marquette