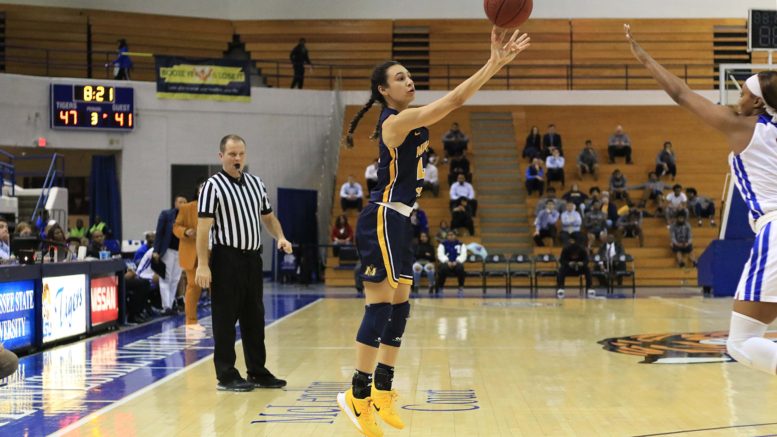 Murray State women’s basketball was defeated in a 96-81 upset at the hands of Tennessee State, which earned its first victory since Sunday, Dec. 15, and its third victory of the season.

Head Coach Rechelle Turner said the team was not prepared for the Tigers’ assertiveness at the beginning of the game.

“We were not ready to play from the beginning,” Turner said. “They just came out and punched us in the face and took it, and as the game went they just got better and we got worse.”

Turner was right, as Murray State wasn’t able to replicate its productive first quarter during the rest of the game.

Both teams came out shooting red hot in the opening quarter, although in different areas of the court. The Tigers’ 2-3 zone allowed open three-pointers for the Racers and they capitalized, as the team shot 7-for-9 from behind the arc. Meanwhile, Tennessee State did its damage in the paint, as they scored 14 points there.

Murray State’s success from deep did not carry over to the second quarter, as the team shot a 0-for-13 clip and managed to score only 10 points in the quarter.

The Racers tried to stop the Tigers’ scoring in the paint with a 2-3 zone of their own, but it was all for naught as the Tigers continued to score there at will.

Tennessee State ended the half with six straight points off turnovers to lead by seven at halftime.

The first half of the third quarter went poorly for Murray State, as the Tigers’ defensive pressure forced turnover after turnover. Four minutes in, Tennessee State increased its lead to 17 points.

However, the Racers rallied towards the end and cut the Tigers’ lead back to 10 going into the fourth quarter.

The fourth quarter was a fouling fest as 23 personal fouls were called as well as a technical foul on Turner. Freshman forward Macie Gibson fouled out with 7:57 to play and sophomore guard Macey Turley was quick to accompany her on the bench, as she fouled out eight seconds later.

The game was all but over after that, with Tennessee State going on to win by 15 points while also securing its first win against OVC opponents.

Murray State could not hold onto the ball all night, as they committed 24 turnovers, which led to 25 points off turnovers and 16 fastbreak points for the Tigers. The Racers were also dominated in the paint, with Tennessee State scoring 48 points to Murray State’s 28.

Turner commended Tennessee State’s ability to come away with a double-digit victory after losing 12 straight games.

“Tennessee State [has] been through a lot of adversity, and for those kids to come out and make big shots, part of me was proud of them and proud for them,” Turner said.

The Tigers had three players score over 20 points, with junior forward Jaden Wrightsell scoring a game-high 29 points to go along with 12 rebounds and six steals.

Two Racers finished the night with career-highs in points, as sophomore forward Alexis Burpo finished with 22 points (9-15 FG) as well as eight rebounds while sophomore guard Raegan Blackburn came off the bench and contributed 16 points (6-11 FG and 4-9 3PT).

The Racers fall to 11-12 on the season and slip to 4-6 in conference play. They are now ranked eighth in the conference, behind Austin Peay and ahead of EKU.

A loss to a team that had not won since December certainly does not make the path of reaching the OVC Tournament any easier, with just six games left in the season.

“I know this [loss] definitely put us in a really bad spot, but we did it to ourselves,” Turner said. “We have got a lot of work to do to try to get this basketball team going again. We have to fight till the end regardless of what happens.”

The Racers will look to get back on track when they travel to Clarksville, Tennessee, to take on Austin Peay at 5 p.m. on Thursday, Feb. 13.