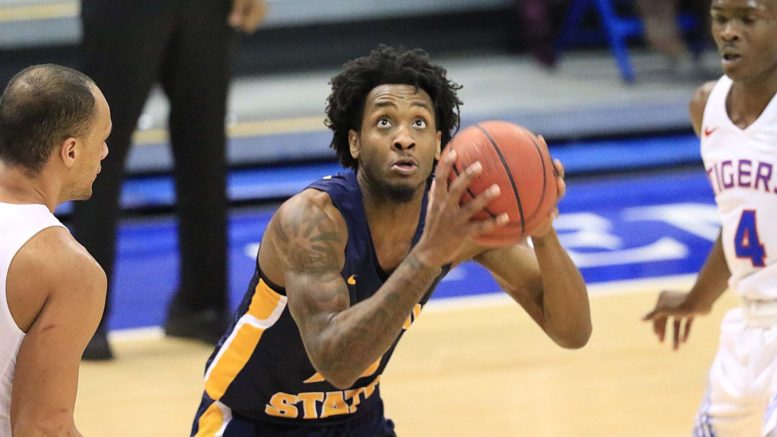 After having its 11-game winning streak snapped by Belmont, Murray State men’s basketball bounced back to secure a win in Nashville, Tennessee, beating Tennessee State 73-65 to claim sole rights to first place in the OVC.

The Racers got off to a slow start against the Tigers with graduate student guard Wesley Harris and redshirt senior guard Jy’lan Washington combining for all of Tennessee State’s points to take an early 11-3 lead.

The Tigers continued to control the lead for much of the first half, with Murray State unable to grab its first lead until two free throws from senior guard Jaiveon Eaves capped off an 8-0 run to take command at 22-20.

Eaves struck again late in the first half, slicing his way through the defense and finishing the layup with a finger roll to give the Racers a 33-29 lead going into the locker room.

Tennessee State hung around throughout the second half, with Murray State unable to distance itself despite owning a 12-point lead with 10:57 left to play.

The Tigers cut their deficit to one until sophomore guard Tevin Brown hit one of his three shots of the night from beyond the arc to take a 62-58 lead.

Sophomore forward KJ Williams helped extend the Racers’ lead, stealing the ball and then later grabbing an offensive board leading to a dunk to go up 64-58 with 1:40 to play.

Foul trouble ailed Murray State throughout the game, but Head Coach Matt McMahon was pleased with how Williams stayed level-headed and provided the Racers with big plays late. He finished the night with 13 points on 4-for-8 shooting to go with eight rebounds.

“He made big plays,” McMahon said. “It’s hard sometimes because he was in and out of the lineup due to the foul trouble. I thought he showed a lot of maturity [and] really stayed engaged in the game and came back in there late and played with a reckless abandon.”

While Tennessee State made it a 68-65 ballgame with 40 seconds left to play, Brown and Williams continued to carry the load offensively for Murray State in the final minutes with free throws and dunks, ultimately walking away with the 73-65 victory.

Coming off a tough loss to Belmont, McMahon felt as though the team’s fight in a tough conference game was crucial in getting the win.

“I’m so proud of our team,” McMahon said. “I thought their response coming off of Thursday’s game was outstanding. I thought it was a high-level game [and] maybe a little choppy with some of the fouls, but I thought both teams really fought their guts out.”

After being dominated in the paint against Belmont Thursday, Feb. 6, the Racers were able to flip the script and outscore Tennessee State in the paint 34-18.

Every Murray State player that checked in scored except for junior guard Jason Holiday and freshman guard Noah Kamba.  Brown led the way for the Racers with 28 points on 10-for-18 shooting.

The win gives Murray State first place in the OVC outright with an 11-1 OVC record, while owning an 18-6 record overall.

The Racers will now hit the road for an ESPNU-aired matchup with the No. 2 team in the OVC, Austin Peay (10-2).

McMahon said the team has a big week of preparation ahead as the Governors will look to dethrone the Racers from atop the conference standings.

“It’ll be a lot of fun,” McMahon said. “I know they’ve had the crowd starting to come back as they’ve rebuilt their program into an obvious championship contender. [They] have two of the best players, not only in our league, but in all of college basketball in Terry Taylor and the freshman Jordan Adams.”

Tip-off is set for 8 p.m. on Thursday, Feb. 13, at the Dunn Center in Clarksville, Tennessee.