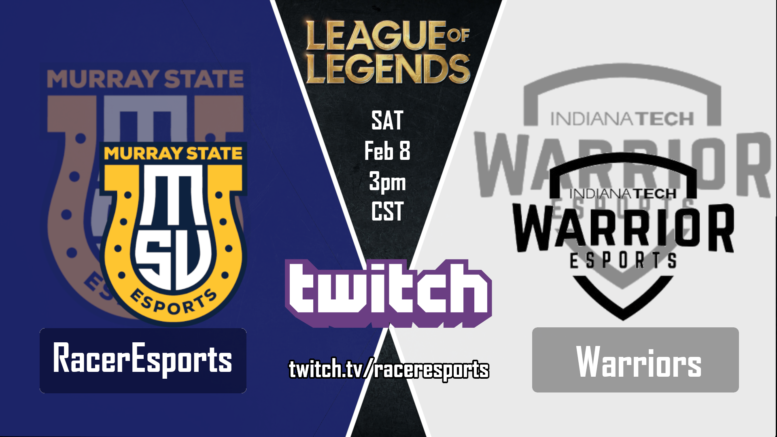 The Racers entered round one with a line-up of Vladimir, Leona, Vayne, Jarvan IV and Lissandra against Indiana Tech’s Akali, Thresh, Kayn, Kal’Sa and Oran.

At 7:10 into game one, the Racers slayed the first dragon of the match, an Ocean Dragon, giving Murray State a 2.5% regeneration of health every five seconds. Murray State took the second dragon objective of the game at the 13:41 mark, slaying a Mountain Dragon for a 6% boost in armor and magic resistance.

Murray State took another Indiana Tech turret at 18:10, giving the Racers a four-turret lead over the Warriors.

Continuing their domination, the Racers took the third dragon, an Infernal Dragon, at 19:37 into the round.

Behind four turrets and three dragons, Indiana Tech forfeited the round 20:02 into game one, putting Murray State up 1-0.

“The main thing that let us win that first round was taking Vayne in the bot lane,” Mitchuson said. “Essentially the team realized that Indiana Tech had gone with a lot of tank champions, which just means a lot of armor, a lot of hit points and stuff like that. Vayne is a champion that does what is known as true damage, so it ignores armor and just pumps out damage, so as long as they could get that Vayne a little stronger, give her a couple items, there was no chance Indiana Tech was going to be able to stop them.”

The Racers entered game two with Swain, Jarvan IV, Lissandra, Jhin and Morgana, while the Warriors chose to use Rumble, Xin Zhao, Karma, Aphelios and Leona.

Indiana Tech completed the first dragon objective of game two, slaying an Infernal Dragon. At 11:14, the Warriors slayed the second dragon, taking down a Mountain Dragon to give Indiana Tech an early advantage.

At the 16:56 mark, Murray State responded by taking its first dragon objective of game two, slaying a Cloud Dragon to gain a 10% ultimate cooldown reduction. Then, at 17:21, the Racers took down one of Indiana Tech’s turrets.

Murray State took the lead in turrets destroyed at 18:32, as they destroyed one of Indiana Tech’s turrets to jump ahead 2-1.

Indiana Tech quickly answered by downing another Racer turret 22:30 into game two. However, Murray State held off Indiana Tech from this point onward. The Racers completed three more Cloud Dragon objectives throughout the course of game two and ended up taking nine of Indiana Tech’s turrets before the Warriors surrendered 38:04 into the second game, giving Murray State a 2-0 victory.

While Racer Esports is on a two-game win streak, Mitchuson says the League of Legends team is still looking for ways to improve for future matches.

“What they’re working on right now is what’s known as flex picking,” Mitchuson said. “They want to build a champion pool of multiple champions that can be played in multiple locations, so they are working a lot more on the pre-match strategy.”