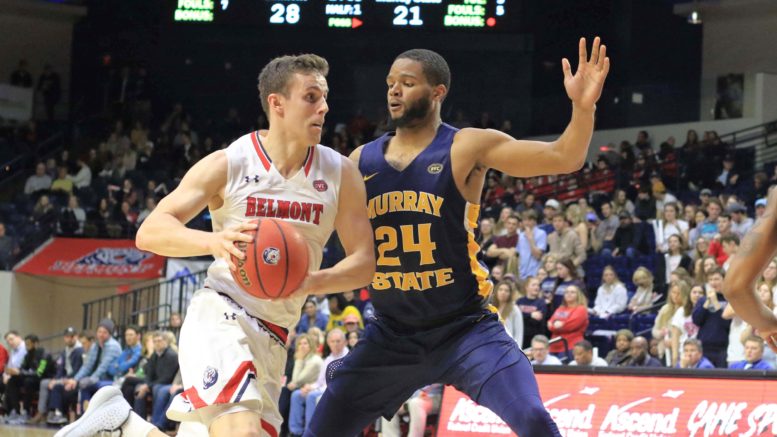 11 games is what it took for someone to knock off the Murray State men’s basketball team in OVC play, the Racers fell to Belmont 71-64 in its second matchup of the season.

Both teams got off to a slow start, with things knotted up at five apiece with 16:42 to play in the first half. Finally, the Bruins got their offense kickstarted, going on a 13-0 run to take an 18-5 lead.

While Belmont continued to roll offensively, the Racers were able to claw their way back within single digits without their leading scorer sophomore guard Tevin Brown, who picked up his second foul at the 12:33 mark in the first half.

Murray State headed into the locker room down 32-26 after losing the battle in the paint and having 12 turnovers in the first half.

However, down 65-61 with 2:05 left to play, the Racers couldn’t string together enough stops and Belmont shot 47% from the floor. The Bruins also dominated the paint, outscoring the Racers there 48-28 in the game and getting second-half outbursts from graduate student forward Tyler Scanlon (17 pts) and sophomore guard Adam Kunkel (12 pts)

Scanlon led all scorers with 21 points and nine rebounds despite 1-for-10 shooting from beyond the arc. Kunkel finished with 20 points and sophomore forward Nick Muszynski finished with 12 points.

While the Bruins did shoot 47% from the floor, they struggled from downtown with a 4-for-25 clip. McMahon has said before that Belmont is much more than a three-point shooting team and that’s how the Bruins’ offense made it tough for the Racers defensively in this game.

“You know everyone says ‘just worry about the three,’” McMahon said. “We certainly didn’t have that approach. We wanted to guard both, but when you have balance it makes it tough. We guarded the three well. I don’t know if they just missed, but I thought we had good contests. But some of the breakdowns on some backdoor cuts…you just can’t give up in a possession by possession game.”

Belmont was also able to turn 22 Murray State turnovers into 19 points, walking away with a 71-64 win.

Senior forward Anthony Smith said it was the Racers’ own fault for the turnover issues.

“They’re a good pressure team,” Anthony Smith said. “It’s not really what they did for us, it was just bad decision making on our hand. They hit us with a good run early and we just made the wrong decision at the wrong time.”

McMahon said while the Bruins did play well defensively, he agreed with Anthony Smith’s assessment of the game.

“Congratulations to Belmont,” McMahon said. “I thought they played extremely hard. [They were] really aggressive defensively. Obviously we did not handle that very well. I thought our guys’ effort was terrific [and] we played extremely hard, but we didn’t play smart or disciplined enough to win against a good team on the road.”

With their 11-game winning streak snapped, the Racers now sit at 17-6 overall and own a 10-1 record in conference play, with the OVC standings getting tighter.

With an Austin Peay loss to Tennessee State, the Governors and Murray State are tied at first with a 10-1 record, while Eastern Kentucky sits at second with a 9-2 record and Belmont sits at third with an 8-3 record.

With its first lost since Dec. 21, 2019, against Evansville, Murray State will now look to regroup for their matchup on Saturday with Tennessee State

The Racers will hit the road for its second matchup of the season with Tennessee State. Tip-off is set for 7:30 p.m. on Saturday, Feb. 8, in Nashville, Tennessee.

Deckard files appeal with attorney general in response to board denial