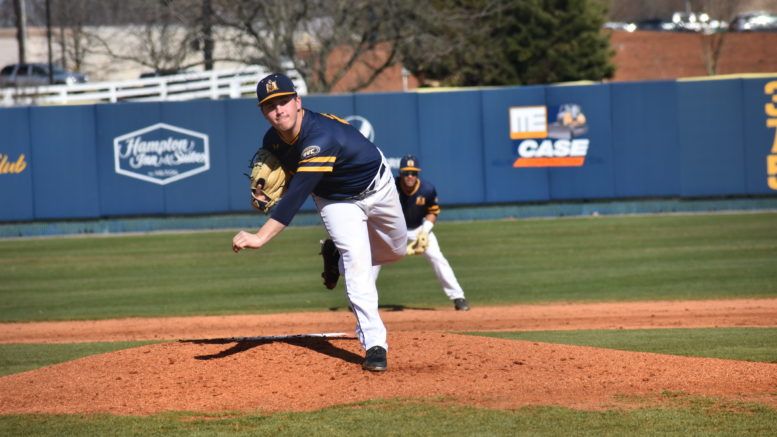 Each passing day takes the Murray State Racers closer to baseball season, which will begin with a three-game series against Southern Mississippi University on Friday, Feb. 14.

Head Coach Dan Skirka has high hopes for this season and thinks the experience of the upperclassmen is among the team’s greatest assets.

“We got a lot of depth,” Skirka said. “And we’re older. A lot of fifth year seniors or fourth year juniors. We might be one of the oldest teams in Division I this year. [We’re] going to lean on that a little bit. They’ve been tested. They’ve been through the fire.”

Among those upperclassmen are senior outfielders Brock Anderson and Ryan Perkins. Anderson played a pivotal role in the Racers’ lineup last season, leading the team in virtually every offensive category, including batting average (.289), slugging percentage (.574), hits (59), runs (47), RBIs (44), triples (4), total bases (117) and home runs (13). The outfielder played and started in 51 games for the Racers in 2019.

Perkins held his own at the plate as well, hitting a clean .273 and driving in 37 runs with an on-base percentage of .362. Perkins also had 54 hits on the year, 10 of which were home runs.

“They’re two of our captains,” Skirka said. “As far as position players go, they’re on the field all the time, working hard, leading and we’ve leaned on them a lot.”

The Racers’ pitching staff is also a promising aspect of the team. After sophomore pitcher Shane Burns had an eye-opening first season at the collegiate level, the anticipation for his second season is on the rise. Burns led the Racers with the lowest ERA last year, finishing the 2019 season at 3.84. Burns’ opposing batting average was the second lowest in the OVC at .224, and his overall record at the end of the season was 3-3.

“We’re excited about Shane,” Skirka said. “He’s in better shape [and] more mature. It’s a workload. It’s a long season. Now that Shane’s been through it, I’m expecting him to make an even greater jump.”

The Racers will look to fill holes in the lineup left by graduates like Jaron Robinson, who became one of 14 in Racer history with over 200 hits. He also hit .273 with 28 RBIs with an on-base percentage of .355 in 2019.

“That senior class was special,” Skirka said. “Tyler Duke had a great senior year and then he broke his pinky. We missed him at the top of the lineup. Payton Hayes’ leadership he brought in the dugout and the locker room will be missed. We’re going to count on those other guys to step up and fill the shoes like good programs do. You pass the baton and leave it in a better place than you found it.”

As Skirka mentioned, Duke’s injury was among the most devastating to the Racers last season.  After 37 starts in the outfield, Duke hit .299 with seven home runs and 26 RBIs. His absence in the lineup will be difficult to overlook, but Skirka is confident this season’s team leaders will pick up the slack.

Skirka plans to continue to build the next generation of Racers in the freshmen this season. Skirka said there is a lot of potential there.

“Jacob Pennington has a chance as a two-way player,” Skirka said. “He’ll pitch, he’ll play infield. Ryan Fender has a really good arm [and] a bright future ahead of him. I’m excited with the freshman class. They’ve been good followers so far with all the upperclassmen. The future for them is really bright.”

Skirka’s plans for the team revolve around the resolve to compete each and every day. Skirka admits the schedule is a challenging one. While he and the Racers are excited to kick off the season with such a challenge, it is only an indicator of the fight that will be the 2020 season.

“We don’t want to be mediocre,” Skirka said. “That’s the jump we have to make: how to have that intensity and that urgency every day. We’re here to take care of business.”

Racers look to hold on to first place in OVC

Racers sit atop the OVC after fifth straight series win