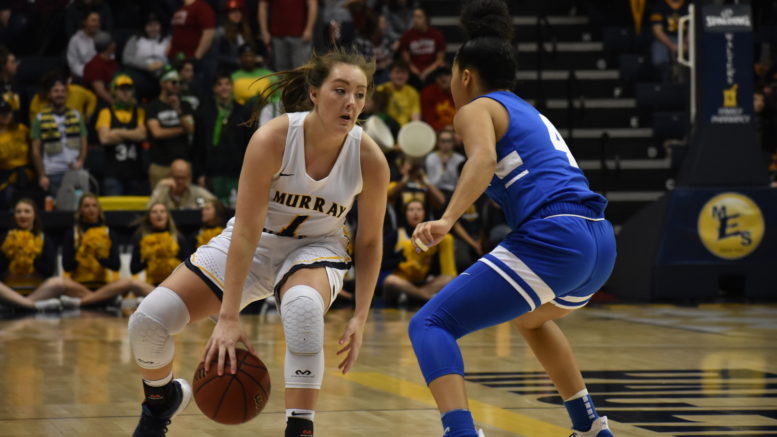 Sophomore guard Raegan Blackburn dribbles between the legs to try and shake the Tennessee State defender. (Photo by Gage Johnson/TheNews)

After averaging three minutes per game in her freshman season, sophomore guard Raegan Blackburn has worked her way into a solidified role off the bench for the Murray State women’s basketball team this season.

Coming out of high school, Blackburn had a life-changing decision to make. She had to decide which college she would attend to continue her exceptional athletic career as well as her education.

Joining her team’s varsity squad as a seventh grader, Blackburn’s stellar six year high school career justified the many offers she received from colleges. She would go on to score over 1,750 total points and make over 300 three pointers in the ensuing years and led her team with 18.4 ppg her senior year.

Blackburn knew she always wanted to play collegiately but did not see herself playing Division I.

“I was looking at smaller colleges—DIII [and] NAIA pretty much,” Blackburn said. “It kind of came to the wire when I decided to come here because I waited pretty much until the last second.”

Murray State was interested in Blackburn, but the University did not guarantee her an athletic scholarship. She knew she would be turning down multiple scholarships from smaller colleges if she chose Murray State.

After discussing it with her family, she chose the place that would offer her the most opportunities.

“I had full rides everywhere else, so it was, you know, get my school paid for or pay and take a risk,” Blackburn said. “So my family and I talked about it and the opportunities that are here are a lot better than what I was going to get at the other schools just because they were smaller.”

Fortunately for Blackburn, she was awarded a scholarship during the summer of her freshman year.

“It worked out for the best, just working hard [and] proving myself to the coaches and the team,” she said.

As an incoming freshman, Blackburn said the transition to Division I basketball was challenging  at first because of the physicality and the difficult practices.

“So coming in, obviously you are going to be nervous as a freshman because it is DI basketball so it is faster and they are bigger,” Blackburn said. “Training and all of that stuff is 10 times harder than what you would ever expect anywhere else. We worked a lot.”

After getting used to the more physical style of play and enduring practices and conditioning, Blackburn and the team were two months away from their first game of the season before she suffered a foot injury.

“I had a stress fracture in my foot,” Blackburn said. “We conditioned, worked for months and practiced for months, and then I was in a boot for the two months leading up to the season. I actually missed the first couple of games that we played.”

Blackburn said her injury made it hard to stay in shape and to get back into the rhythm of the season.

As a freshman, Blackburn played only 57 minutes and attempted only seven field goals. Blackburn’s injury and lack of confidence because of it were the primary reasons she had a slow start to her Racer career.

“Freshman year was kind of slow for me and confidence, really, was like my main part of not doing what I wanted to do, but the injury is what really held me back,” Blackburn said.

Blackburn had a new-found confidence heading into this year and wanted to prove she could be a contributor at the Division I level.

“Coming into sophomore year, I knew I could play here and I wanted to play more and so [I] was just working hard [and] gaining my confidence back,” Blackburn said.

This year, Blackburn has become a key rotational piece for the Racers and has been the first player off the bench to come in for the last several games. In Murray State’s last six games, she has played 18.5 mpg and has become a three-point spark plug off the bench.

“I would say I have gotten better,” Blackburn said. “My percentages shooting-wise are not the best, but again, with gaining confidence, I was recruited to shoot so that’s what I am going to do.”

While she and her team consider her a three-point shooter, she wants to improve other areas of her game so she can help the team in more ways.

“As of right now, just getting back into my shot [and] raise my percentage up on threes,” Blackburn said. “And also look more for my jumpers as well because I can shoot those too. Just always focus on defense and help the team out there.”

Head Coach Rechelle Turner had nothing but positive words to say about Blackburn.

“Raegan has always worked hard,” Turner said. “[She has] always been one of the players [that] does things that we need her to do. She can shoot the basketball and make shots. [That] is going to be huge for us going forward.”

By the end of her Racer career, Blackburn wants to become a better player and have good grades so she can go to dental school.

“I don’t have any major goals but I mean obviously get better as a player and then graduate with good grades and hopefully go to dental school,” Blackburn said. “That’s my major goal.”

Racers looking for resurgence in 2019