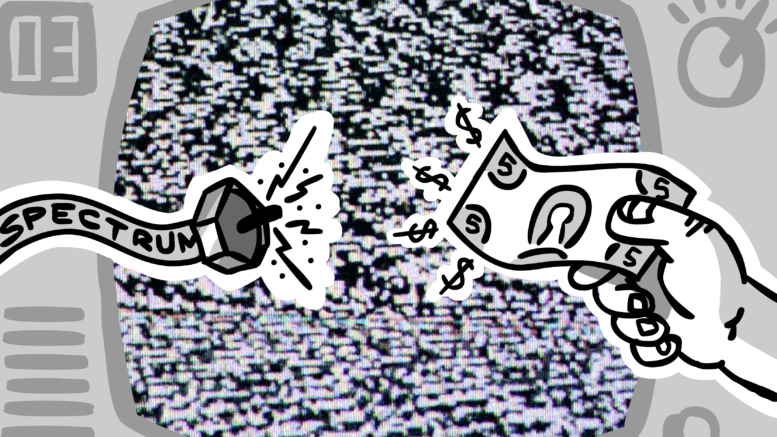 SpectrumU TV, the cable streaming service provider for Murray State, certainly has its benefits
for those students who utilize it. Supplied for people living in the residential colleges, SpectrumU
TV is a great way for students to come together to enjoy live sports, entertainment and news.
Murray State works hard to provide various types of entertainment on campus and genuinely
listens to student preferences so they enjoy their home away from home. Cable is one of these
great services, and many thoroughly enjoy it. Yet, not everyone in the residential colleges use
cable.
Currently, cable is provided in each residential college room and lobby, as well as the College
Courts. The University pays a substantial amount for cable access to these areas.
Shawn Touney, executive director of marketing and communication, provided the exact
amount the University spends for SpectrumU TV.
“The University pays approximately $9,000/month for cable services to each residence hall
room,” Touney said. “The agreement also includes cable services for the lobby of each
residence hall but not for the study or lounge areas of each hall.”
Excluding the three months of summer break, this totals to $81,000 per school year.
Touney said the contract is based on the number of connections provided. Therefore, if every
room in the residential colleges isn’t fully occupied, the room still has access to SpectrumU TV.
Also, if a student doesn’t utilize the cable serviced to their room, they still pay for it.
A Facebook poll conducted by The Murray State News asked if students use on-campus cable
in the residential colleges. The sample showed that 63% of the 73 students who voted do not
use on-campus cable and 37% do.
Likewise, a Twitter poll showed that out of the 37 students who voted, 56.8% do not use the
service and 43.2% do.
Despite the majority declining to use cable, a significant portion of students do enjoy the
services they pay for. Since a large quantity of people use cable, it should not be discontinued
on campus, but assessing how most do not utilize the service, it’s understandable to see why
they wouldn’t want to pay for it.
A few members of The Murray State News Editorial Board said they use cable services every
once in a while, but not enough to be devastated if it were to be discontinued. Other members
only use streaming services such as Netflix and Hulu.
As of October 2019, Touney said SpectrumU TV is not under current consideration for
elimination. And it shouldn’t be eliminated, considering a substantial number of students do use
and enjoy cable. However, it’s a hefty price that ultimately falls on students to pay when only a
portion utilize it.
If feasible, perhaps housing could offer cable in half of the rooms, or a smaller number of
rooms, in each residential college. Then, the rooms with cable could be chosen by students who
want it. The ultimate goal is for students who use cable to continue and those who don’t use it
not pay for it. This also might benefit the University as it would cut costs.
Streaming services are predicted to become the new cable. Major television networks are
struggling to compete with streaming platforms, which tend to draw in younger audiences who
are attracted to the unlimited content without commercials.
According to Forbes, streaming platforms neared $20 billion in 2018 and subscriptions
continue to rise. Younger generations have been blamed for killing cable by turning to the
convenience of streaming services and even YouTube. According to the World Economic
Forum, 73% of Millennials use online streaming services with Netflix and Amazon in the lead as
of 2018.
Whether people cut the cord on cable, it’s great that Murray State students still utilize cable as
much as they do.

Want a Job? Go to Your College

Get ready for fall television!