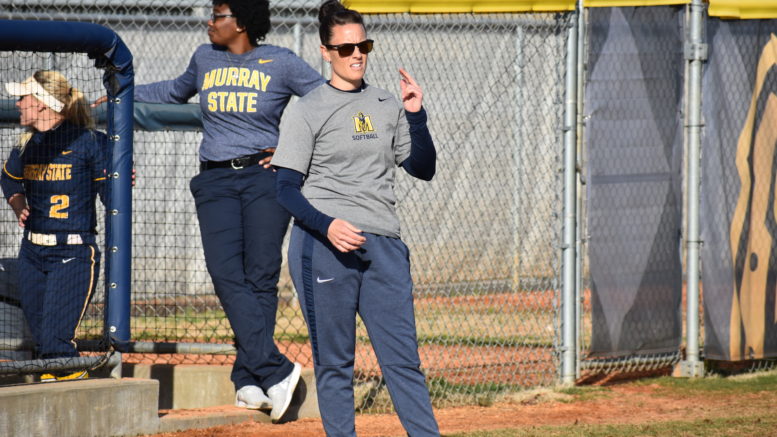 Head Coach Kara Amundson gives a sign to the batter and baserunners. (Photo by Gage Johnson/TheNews)

The Murray State Softball team is preparing to be a big competitor in the upcoming season.

The Racers are expected to finish fourth in the OVC this year per a preseason poll. Head Coach Kara Amundson said the ranking is not all that surprising.

“At the end of the 2019 season we were essentially tied for second in the conference and we got the fourth place seed in the OVC tournament,” Amundson said. “I think most of the preseason rankings are matched up pretty closely with how everyone finished last year.”

Sophomore pitcher Hannah James will be a key to this year’s success as she was named 2019 OVC Freshman of the Year, and received All-OVC Second Team honors as well as a spot on the OVC All-Newcomer Team.

James also finished her freshman season with a 2.58 ERA and held her opponents to a .256 batting average. She also earned herself a 4.24 K/BB ratio with 120 strikeouts and 29 walks and recorded Murray State’s first ever seven-inning perfect game against Belmont.

Amundson was surprised by James’ performances and expects her to contribute even more this year.

“She’s [James] absolutely expected to, and I think interested in, obviously having that same role,” Amundson said. “She is in some ways a veteran on our staff because she has a ton of innings under her belt already even as a, as a sophomore.”

Senior Taylor Makowsky is another name that should turn heads when the season begins.

Makowsky recorded a 2.93 ERA and held opponents to a .238 batting average in her junior stint and also earned a spot on the OVC All-Newcomer Team.

Amundson also hopes that Makowsky can keep up the high-level play this season.

“Taylor’s story is obviously a little bit different than Hannah’s,” Amundson said. “She came in last January and didn’t have much breathing time to figure it out. I think my players that were already here took her in with open arms and she just settled in and has been a huge impact for us.”

Amundson wants her team to know early rankings aren’t that important. Instead, what matters is being high in the rankings later in the season.

The Racers begin their season at the Doc Halverson UNI Dome Tournament where they will play the South Dakota State Jackrabbits at 11:15 a.m. on Friday, Feb. 7, in Cedar Falls, Iowa.