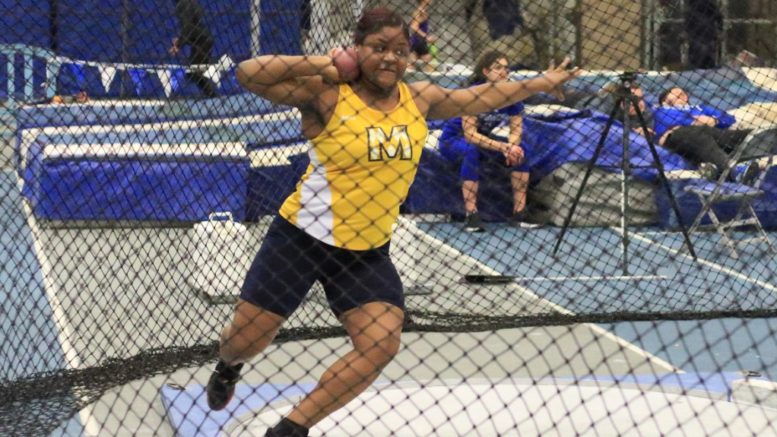 The Murray State track and field team traveled to Carbondale, Illinois, on Friday, Jan. 24, and Saturday, Jan. 25, to compete in the Don DeNoon Invitational at Southern Illinois University.

Day one of the competition began with a pentathlon, in which Murray State athletes gave outstanding performances, with redshirt junior Jessikha Ribeiro placing first and sophomore Ashly Oren placing second.

Ribeiro took wins in the 60-meter hurdles with a time of 9.19 seconds, and Oren placed second in the event with 9.35 seconds. Ribeiro and Oren both won in the high jump, as both Racers jumped 1.65m.

Racers participated in other events on the first day, including weight throw, high jump, triple jump and pole vault.

Murray State’s highlights from these events include senior Jewel Wagner taking fifth in the weight throw with 18.04m. This distance is Wagner’s new career-best and the third-best distance in the OVC this season.

To Murray State Head Coach Adam Kiesler, these performances are indicators of the strength of the Racer track and field team.

“I think overall it was definitely a step in the right direction,” Kiesler said. “Rachel Hagans had yet to long jump for us at Murray State. It was good to see her out there competing [and] learning things like that to be able to possibly help us at the OVC championships. [Jabreuna Brimlett] running the hurdles was good for us. It’s good to see her run before outdoor. Then the relay was just comprised of kids who wanted to run and compete, so they did well for themselves.”

Overall, the whole event served as an indicator to Kiesler that the Racers are on the right course for a successful season.

“I think that things like our training and things like that are paying off,” Kiesler said. “I think for the most part all the pieces that we are trying to put in place throughout the season are kind of coming to fruition, so it’s going to be a battle moving forward. I think that we accomplished most of our goals coming out of the weekend.”

The Racers have a two-week gap between the Don DeNoon Invitational and their next meet at the Marshall Invitational on Friday, Feb. 7, and Saturday, Feb. 8, in Huntington, West Virginia. Kiesler views this period off as a way for the team to heal and improve as they start to think more about a championship run.

“Since we don’t have a meet this weekend, I think there’s two or three things that are kind of happening this week,” Kiesler said. “Banged-up kids hopefully are going to get some rest. Kids who need a little bit more work can get that. When you have a meet on the weekend, it kind of dictates your practice schedule, so this time we can have a few more practices. Once February hits, then it’s really championship mindset. Marshall’s kind of a meet where we’re really going to start putting kids in place so they can see success in their main events.”

The Racers will compete at the Marshall Invitational starting Friday, Feb. 7.