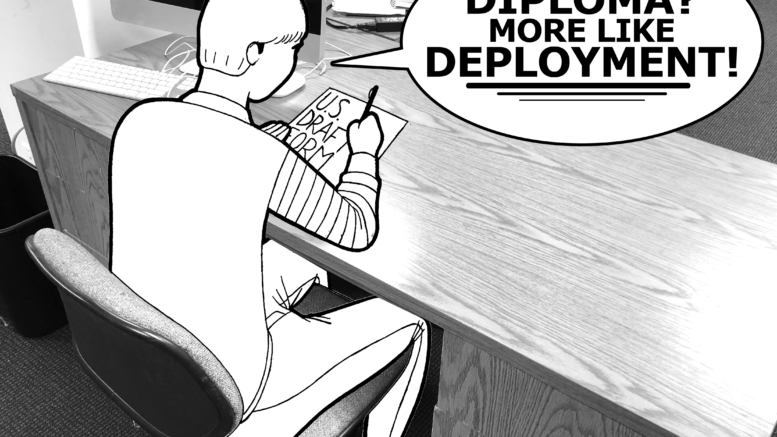 College students descended into a frenzy over the draft after a U.S. airstrike killed a top
commander of Iranian forces on Friday, Jan. 3.
Following the airstrike, social media spread fear in the form of misinformation and memes
about college students packing their bags for World War III. College students in particular were
concerned about a draft, and many fingers pointed to the Free Application for Federal Student
Aid for its section that asks if applicants have registered.
Question 22 on the FAFSA states “most male students must register with the Selective Service
System to receive federal aid. If you are male, are age 18-25, and have not registered, fill in the
circle and we will register you.”
Selective Service System, a government agency that registers men and is responsible for
running a fair draft, states on their website that the United States military has been volunteer
based since 1973. However, an Act of Congress could reinstate it.
Although there isn’t an active draft, this is an issue that still concerns college students.
Primarily, if an eligible male does not sign up for the draft then that student cannot receive
federal financial aid for school. Secondly, students cannot opt out of the draft if it were ever to
be reinstated. According to Selective Services, a college student can postpone leaving only until
the end of their current semester.
A potential active draft or being denied federal financial aid isn’t a concern solely for male
students. Recently, U.S. District Judge Gray Miller ruled it unconstitutional for an all-male
military draft. No change would happen in the near future, but it could happen at some point. If
there came a time when Congress issued a draft, women should be part of it.
It seems manipulative that the government would deny needed federal aid if a student would
rather not register for an inactive draft. Further, it isn’t right that a student could be conscripted
to fight in a war for causes they disagree with. Younger generations are less likely to politically
align with the current administration, and therefore will not stand to back this conflict.
The idea of a future military draft is vastly unpopular, especially among younger generations.
It’s absurd to think we would risk our lives because of violence committed by a president whose
actions don’t seem to suggest he cares for a life other than his own.
After the Jan. 3 airstrike, Twitter trended with hashtags like #NoWarWithIran and #NotOurWar.
The idea behind the movement was to rebel against an unwanted fight on behalf of an
unsupported president. Both Americans and Iranians backed these opinions.
In regard to the World War III jokes circulating social media, Americans need to recognize their
privilege because we cannot predict the violence that would ensue if a war were to come to
fruition.
Drafts are used in wartime when volunteers are needed. The United States Armed Forces
currently already has over a million members, so there is no need to force people into a draft if it
were reinstated.
It’s fair to say college students do not know—and shouldn’t be expected to know—each
endeavor or function within the government and military. Our present concern is obtaining a
degree, but we must prioritize being as informed as possible about the happenings of the
government and current events.
Hopefully young people choose to utilize their knowledge to stay informed about their country.
Even if our career paths will not directly impact politics, our votes will. If we can use our degrees
for anything, let it be to restore the damage that has been done over the past four years.