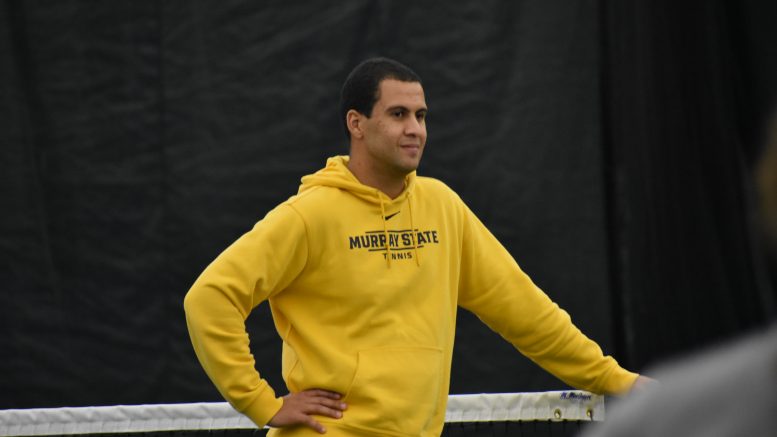 The schedule features 23 matches, 15 of which are non-conference. Moreover, 13 of the matches will be on the road.

Caetano looks forward to a challenging but exciting season.

“I think we are going to be playing competitive matches,” Caetano said. “We have a chance to win all of them, but we know it’s going to be tough. Some tough road matches. I think it’s really going to prepare us for conference play in March, and we are going to have some really good home matches as well with some strong teams that are very similar to OVC competition”

The Racers will start the spring campaign on Saturday, Jan. 25, with matches against Indiana University-Purdue University at Indianapolis at 9 a.m. and Bradley University at 1 p.m. in Peoria, Illinois.

Caetano believes that this first game will allow the Racers to gauge how prepared they are for the rest of the season.

“I think from the very first day that we play—Jan. 25—it’s going to be very similar to what we are going to see in OVC, so I think that’s going to be a plus for us,” Caetano said. “We have a double header, so that’ll be tough but at the same time I think it really prepares us physically for the rest of the season. It’s not going to be easy matches, but the girls have been following our strength and conditioning program, so they should be in really good shape coming back after the break. I think those two matches really, really help in that aspect. If you can last a day playing two doubles and two singles, you know, it gets you not just physically but mentally ready for the next challenge. You know you can sustain one match in one day.”

This season’s schedule will see the Racers taking on new opponents such as the University of South Dakota in Springfield, Missouri, on Saturday, Feb. 8, as well as New Orleans on Tuesday, March 17 and Tulane on March 18 during a trip to New Orleans, Louisiana, in the middle of Murray State’s 2020 OVC campaign.

Caetano views these matches as some of the Racers’ toughest tests during the spring.

“We are going to play South Dakota in Springfield, Missouri,” Caetano said. “We’ve never played them. They are very similar to OVC schools, their level, so that should be good. We are traveling to New Orleans for Spring Break. We are going to play New Orleans and Tulane, and those are two teams we have never played, so that should be interesting to see. Tulane has a really, really strong program. That will be the toughest match in our schedule for sure. They’ve been ranked.”

Even though the Racers will spend a lot of time traveling this season, Caetano says it is less than normal.

“It’s the most we’re playing at home,” Caetano said. “We usually play away even more. We are going to be playing…five matches at Kenlake, which is our home when it’s indoor, and five on campus. I really believe that road matches make us tougher.”

Golf one shot off lead at Drake Creek