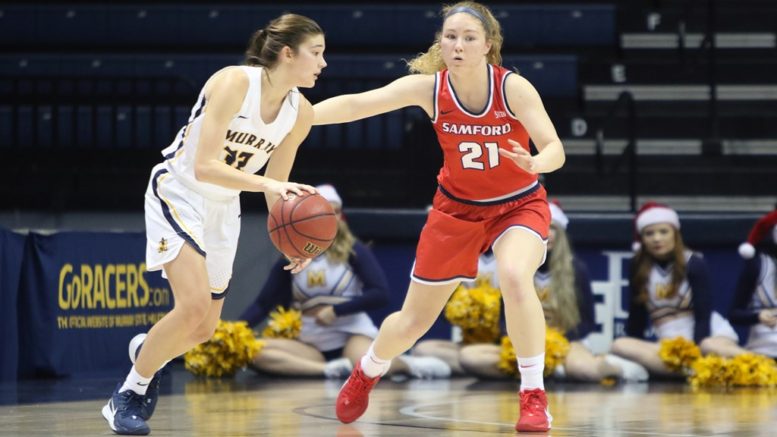 With the Murray State women’s basketball team trailing 51-14 to Samford University at halftime, the Racers were not able to recover and lost to the Bulldogs 84-56 at home on Friday, Dec. 20.

Head Coach Rechelle Turner said the team did not learn from its last game that they should be ready to play from tip-off.

“We thought we would’ve learned from the SIU game that you better be locked in from the beginning because it’s hard to play from behind,” Turner said. “Obviously we didn’t take that lesson into tonight.”

In the first quarter, the Racers struggled to make any shots and shot only 1-for-6 from deep while the Bulldogs dominated the quarter offensively, scoring the game’s first 18 points and leading 25-6 at the end of the quarter.

Turner believed her squad let their lack of offense dictate their defensive effort.

“Part of the problem was they’re so good offensively that we had to be locked in defensively at the beginning of the game and we weren’t,” Turner said. “We were giving them open shots, and obviously they were making them. We let the lack of offensive production affect us defensively.”

The second quarter was no different, and the Bulldogs increased their lead to 37 points while scoring a program first-half record of 51 points.

The Racers showed more fight in the second half and outscored Samford 25-13 in the third quarter to cut the lead to 25, making the score 64-39. The fourth quarter was fairly even between both teams, though the Bulldogs outscored the Racers 20-17 and won by 28 points.

Turner was pleased with her team’s second half effort, but said the team can’t win games when they fall behind as much as they did in the first half.

“We did play better in the second half but again, we are not good enough to dig ourselves holes,” Turner said. “Our margin of error is very slim and we have to make sure that we play every second of the game in order to have a chance to win it.”

Five players scored in double figures for Samford, with junior guard Katie Allen leading the Bulldogs with 17 points on 5-for-7 shooting from behind the arc. Junior center Natalie Armstrong shot 6-for-10 from the field and 4-for-5 from the charity stripe to score 16 points. Armstrong also grabbed eight rebounds.

“Anytime somebody has a big kid on the inside, it is going to be a problem,” Turner said. “And when you put four shooters around that big, it’s even more of a problem because you can’t help as much and dig as much.”

With dropping the last two games and having a short break around Christmas, Turner wanted her team to reflect on these losses over the break.

“This is two in a row, so I’m hopeful as they have time off for Christmas that we reflect on this [and] that they will understand that this is not going to win games,” Turner said. “This is not going to get us to where we want to be.If you don’t learn from it, then you’re not trying to grow. I think as a coaching staff we learn from it.”

The Racers return after Christmas break to play its last non-conference opponent of the season, Cumberland University, at 5 p.m. on Saturday, Dec. 28, at the CFSB Center.