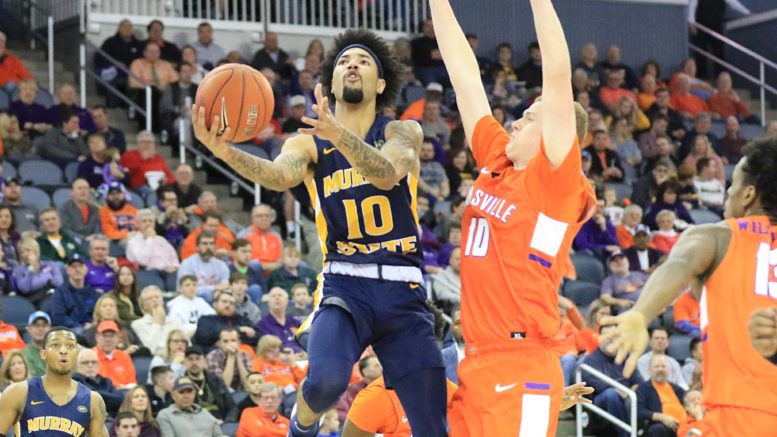 Evansville jumped out to a 22-18 lead thanks to eight unanswered points from junior guard Artur Labinowicz after multiple lead changes to start the game.

Labinowicz was lights out in the first half against the Racers, scoring 13 points on 5-for-5 shooting with 3-for-3 coming from beyond the arc. Labinowicz finished the night with a career-high 24 points.

Meanwhile, Murray State struggled to find consistent scoring with no Racer notching more than five points in the first half. This allowed the Purple Aces to head to the locker room in control with a 41-27 lead.

Both teams continued to go back and forth until sophomore forward Deandre Williams hit a three with the shot clock expiring, to put Evansville up 69-66 with 12 seconds to play. This seemed to be the nail in the coffin as the Ford Center erupted in cheers that silenced any Murray State fans in attendance—but sophomore guard Tevin Brown had other plans.

In the Racers’ previous game Brown went scoreless, going 0-for-7 from three. Brown was similarly unable to get much going in the first half against the Purple Aces, only tallying five points going into the latter half of the game.

However, Brown exploded in the second half, drilling an isolation three from beyond NBA range that sent Murray State and Evansville into overtime tied at 69 apiece. Brown finished the night matching his career-high of 31 points on 8-for-20 shooting, with 4-for-9 shooting from beyond the arc and 11-for-15 shooting from the charity stripe.

Head Coach Matt McMahon thought it was the Racers’ execution as well as his aggressiveness that allowed Brown to have an impressive night against the Purple Aces.

“I thought he did a nice job of getting to the free throw line,” McMahon said. “He got some open looks and sometimes it’s just good to see the ball go in. I thought some of our execution was better too. I thought we got him freed up with some space where he was able to step up and make some big plays for us.”

Murray State had a moment of déjà vu in the closing moments of overtime, trailing Evansville 78-76 with one last possession in its grasp. The Racers found Brown for a corner three that would have won the game, but it rimmed out—as did a tip-in attempt from freshman guard Noah Kamba that would have tied the game—giving the Purple Aces a 78-76 overtime victory.

Turnovers were a huge factor in Murray State’s loss, as Evansville was able to turn 20 turnovers into 34 points.

McMahon said this lack of execution on the offensive end, as well as the inability to finish some plays, is what ultimately cost them the game.

“Unforced errors,” McMahon said. “I think we had 10 in the first half. Those are just empty possessions where we didn’t even get a shot and thought that’s what really hurt us there. [Also] I’ll have to go back and chart it, but I thought we had some opportunities to finish some plays around the basket that we did not complete in the first half.”

Despite the unwanted result, McMahon was thrilled with Murray State’s comeback effort at the Ford Center.

“I’m really proud of our team,” McMahon said. “I thought our guys fought like crazy. Obviously I was disappointed in our first half, but I think over half of our team is out with injuries and the guys kept fighting and scrapping and gave ourselves a chance to win. We just came up a couple points short.”

With multiple players suffering injuries and getting into foul trouble, Kamba found himself getting his first big chunk of minutes on the season in crunch time. The freshman guard played 20 minutes, scoring four points while grabbing two rebounds and dishing out two assists.

McMahon thought that Kamba stepped up to the challenge well despite three turnovers and was a key player on both sides of the floor in the Racers’ comeback attempt.

“I thought he played well,” McMahon said. “I thought he was solid for us defensively out there. He did a good job with some execution. He made a couple freshman mistakes, but we all made mistakes today.”

Now sitting at 6-5 overall, the Racers will take a couple of days off before getting prepared for their final non-conference game of the season against Cumberland University.

“It’s important that we get home and enjoy family and friends for a few days and celebrate this holiday,” McMahon said. “Then when we get back hopefully get healthy and get back on the winning track on Saturday night as we get ready for nine straight weeks of conference play.”

Tip-off against the Phoenix is set for 7 p.m. on Saturday, Dec. 28, at the CFSB Center.

Racers ready to pick up where they left off

Boil water order: Murray water could be unsafe to drink

Student hit on corner of Chestnut Street and Waldrop Drive