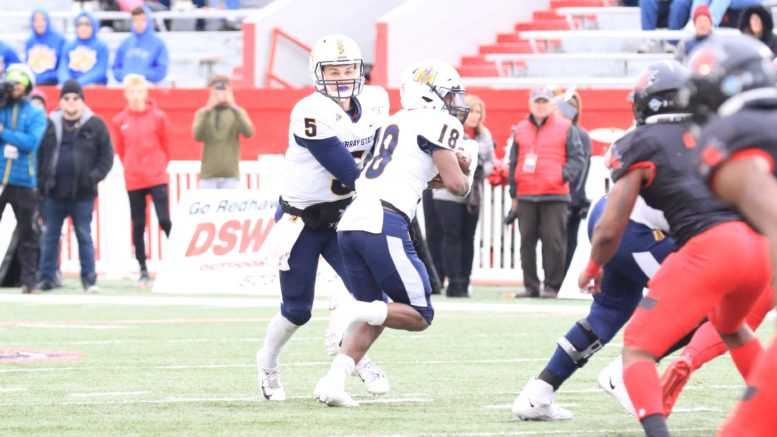 Murray State football held its own for three quarters, but fell to the Southeast Missouri State Redhawks 31-24.

The Racers shocked the SEMO crowd when they took an early lead on a five-yard rushing touchdown from Preston Rice.

The Murray State defense held the Redhawks’ offense to only a 35-yard field goal from junior kicker Kendrick Tiller in the first quarter.

In the second quarter, freshman kicker Zaden Webber extended the Racers’ lead to seven after he connected on a 26-yard field goal.

Soon after Murray State got the ball back, redshirt sophomore quarterback Preston Rice threw an interception to SEMO senior linebacker Zach Hall who returned it 61 yards for a pick-six, finally giving the Redhawks the lead.

Only two minutes went by before Rice’s three-yard pass fell into the hands of redshirt sophomore wide receiver LaMartez Brooks for another Murray State touchdown.

In the final minute of the second quarter, Rice completed a 28-yard touchdown pass to sophomore wide receiver Armani Hayes to regain the lead.

SEMO tried to tie the game with 35 seconds left in the half, but redshirt senior linebacker Kendrick Catis grabbed the interception and the Racers ran out the clock.

The Redhawks came back once again in the fourth quarter and tied the game on a 17-yard touchdown pass from Santacaterina to junior wide receiver Zack Smith.

While not happy with the outcome, Head Coach Mitch Stewart is proud of the effort his team showed for the final game of the season.

“The guys hung in there together and they fought together,” Stewart said. “We had our chances right there at the end, but I could not be prouder of the effort.”

The Racers finish the season 4-8 and will not compete in any post season tournaments. SEMO on the other hand, finishes 9-3 and shares first place with Austin Peay State University.

The Redhawks are now looking to get an at-large bid in the FCS playoffs.