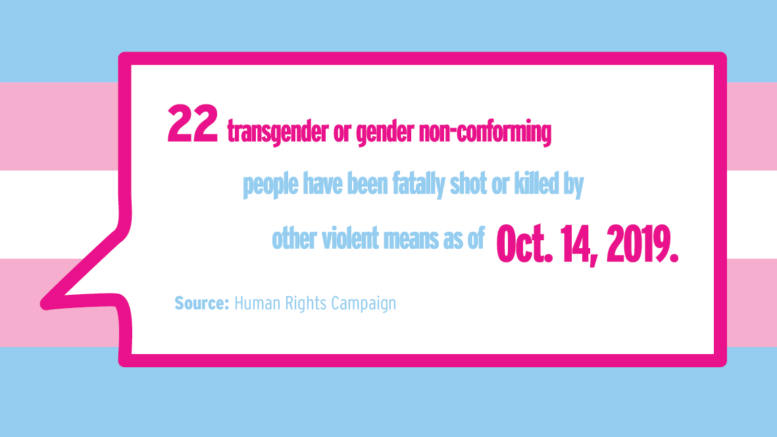 Transgender Awareness Week is celebrated the second week of November, leading up to the Transgender Day of Remembrance which memorializes victims of violence.

The purpose of Transgender Awareness Week is to educate about transgender and gender-nonconforming people and the issues associated with their unique identity.

“Trans Awareness Week is the week leading up to the Transgender Day of Remembrance where we remember those whose lives were lost as a result of anti-transgender violence and bring attention to the high rate of violence committed against transgender people, especially transgender women of color,” MC Lampe, Office of LGBT Programming coordinator, said.

Transgender Day of Remembrance is a day to honor transgender people and remember the violence they have faced throughout history.

“[It] is a day to remember all of the trans people that were killed in anti-trans violence each year,” Kearby Stiles, president of the LGBT Alliance, said. “It brings attention to the fact that discrimination and extreme levels of violence are real things that this part of the queer community faces.”

While transgender visibility is increasing, they face discrimination and violence in their everyday lives, from health care to housing and from restaurants to interactions with law enforcement.

“A lot of people don’t know about how many trans people are murdered every year, or that it is totally legal in most of Kentucky – and in 28 other states – to fire someone or deny them housing because of their gender identity,” Lampe said. “Bringing awareness to those issues is the first step in changing them. LGBT Programming will be highlighting individuals who have lost their lives to anti-trans violence this year through a social media campaign throughout the week.”

Stiles said as an ally, one should learn the basic terminology surrounding the transgender community. There are so many resources for people to learn more about the community and be supportive.

“When people are informed, open-minded, and accepting of others it helps a lot,” Stiles said. “Trans Awareness Week helps to bring the trans community to people’s attention, and remembering those whose lives have been lost is important.”

Transitioning students on campus can reach out to the LGBT Programming Office for resources and support groups.

“When it comes to resources it really depends on what students need,” Lampe said. “The Office of LGBT Programming is always available as a support resource for transgender students on campus. Through the office, we have a confidential support group for trans students. The group has been on hiatus this semester but will start back next semester. If anyone is interested in that they can contact the LGBT Coordinator for more details. We are also working on creating a trans resource closet to support students who are building up their wardrobe or want to try out a new look.”

Simon McNeal, senior studio arts major, is one of many transgender people in Kentucky and at Murray State.

“If you are someone who is out, it never hurts to ask,” McNeal said. “Many professors are very good at changing pronouns, changing names, referring to you in a particular way. Professors are even good at keeping that distance for people who are out [by referring] to themselves by their preferred gender identity in class but [using their birth name in] academic things or regarding their home life or parents. It never hurts to ask, and it never hurts to get in touch with the [LGBT Programming] office or MC [Lampe]. Trans people are everywhere, you are not alone. It might be hard, to try and reach out to people, but there is a community and we are here for you.”

The LGBT Programming office is also available to students who wish to be further involved with advocating for transgender students and increasing inclusivity on campus.

“I would love to see groups and departments on campus other than just the LGBT Programming Office hosting programs or events that support our transgender campus community,” Lampe said. “My office is always here to support and provide resources but getting the whole campus community involved would send a great message. If we recognize trans people, the lives they live, and the specific challenges they face as a result of transphobia and anti-trans hate, we can begin taking steps to create change.”