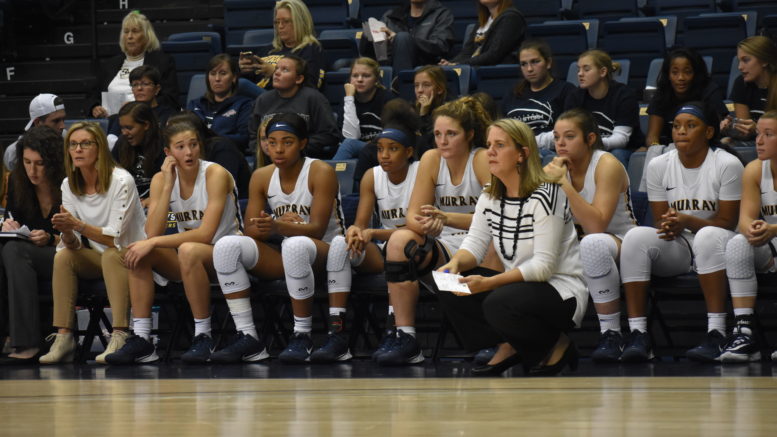 In the second year of Head Coach Rechelle Turner’s tenure, Murray State women’s basketball shocked the conference last season and hope to build on that with a young team this season.

Last Season vs. This Season

The Racers were expected to finish last in the OVC preseason poll last year, but a 9-9 conference record put them in a tie for sixth place with Jacksonville State.

Murray State got the No. 6 seed in the conference tournament and took an early exit after falling to the three-seeded UT-Martin Skyhawks.

This season, the team has been picked to finish eighth in the OVC and Head Coach Rechelle Turner is proud of the growth her young team showing but explains that to her and the team those are just rankings.

“I’m very proud of the fact that we were able to get that respect,”  Turner said. “But I tell my players all the time you’re gonna prove people right or prove people wrong every time you take the court.”

“To be the best you have to play the best”

The Racers will begin the regular season at the University of Louisville at 6 p.m. on Friday, Nov. 8 at the KFC Yum! Center in Louisville, Kentucky.

The Cardinals have made it to or past the NCAA Tournament Round of 32 for the last nine years. They made it all the way to the Elite Eight last year before falling to the University of Connecticut 80-73.

The next week, they’ll travel to Mississippi State University to take on the 2018 National Championship winning Bulldogs at 7 p.m. in Starkville, Mississippi.

“Our kids are excited about those opportunities,” Turner said. “Being able to play in those venues to see what it’s like to go against the best, those are Final Four teams. I’ve always believed that if you want to be the best, you have to play the best and try to emulate their success.”

The home opener and conference play begins for Murray State at 5 p.m. on Thursday, Jan. 2 at the CFSB Center.

The team will face Belmont on Jan. 23 and the Battle of the Border versus Austin Peay will be at 5 p.m. on Thursday, Feb.13 in Clarksville, Tennessee.

“Our first 10 or 12 games in the conference are against the top five teams in the conference,” Turner said. “Putting, still a young team, out on the floor you just gotta realize we’re still in the process. We gotta take it one day at a time and continue to improve.”

Adebayo, after averaging and leading the team with 18.2 ppg and 11.4 rpg, was offered a spot on UConn’s roster which led to her transferring to the college basketball powerhouse.

Griffith-Wallace transferred to Virginia Commonwealth University. In the 2017-18 season, the Rams went 7-22. The following year they improved to a highly respectable 24-10.

Turner admitted losing those two important players on the team was tough, but she has key returning players in sophomore guards Macey Turley, Lex Mayes and sophomore forward Alexis Burpo.

“They have a bit of an advantage because they understand what the expectations were from the very beginning,”  Turner said. “They hear the same lingo, there’s definitely communication, there’s no gap there. Last year as freshmen they went out and proved themselves with the way they played.”

She also tied the third longest made free throw streak by making 29 and finished with the 26th best average in the nation.

Mayes finished her freshman season averaging 7.7 ppg. She also led the team with 56 made three-pointers and an average of 38.6 percent from behind the arc.

Burpo started in 12 games and had a 41.2 field goal percentage. She recorded a career high 14 points against Oakland City University.

Turner added four new players to the roster and they are expected to make big contributions early.

Freshman guard Jentri Worley was the first to be signed for the upcoming season. Averaging 20.5 ppg and 5.2 rpg, Worley led her hometown Neelyville High School Lady Tigers to the Missouri Class 2 State title and a 25-4 record.

Turner believes Worley is a great addition to the team for the ability to play multiple positions and bring a killer mentality to the team.

“Jentri is a strong guard that can change a game in several different ways,” Turner said. “She is a winner and will bring that mentality to our program.”

“Jentri is very capable of playing the point and relieving pressure from Macey,” Turner said. “Macey is really good at sliding over the two. We can run Macey off some screens and give her some help by taking her off the basketball. Jentri’s arrival is definitely helping us in being able to move pieces around.”

Next to sign was freshman forward Sarah Sutton from Allen County-Scottsville High School in Scottsville, Kentucky.

Turner has high hopes for Sutton because of her dominant presence on the court.

“Sarah is a player that can stretch the floor by knocking down shots,” Turner said. “She comes from a tradition rich program and understands what it takes to win.”

Sutton finished top five in the ACSHS all-time scoring leaders and earned the titles of Region 4 Preseason Player of the year and District 15 MVP.

Hunter transferred from Moraine Valley Community College where she became the schools second all-time scoring leader at 1,206. She also holds the Moraine Valley record for points in a single game at 48 and an NJCAA record for most made field goals at 21.

The 2017 McDonald’s All-American nominee was an important player for New Mexico Junior College as she helped the team reach the finals of the 2019 NJCAA Division 1 Championship.

She played in all 35 of her team’s games and averaged 9.8 points and 5.4 rebounds. Before coming to Murray, Hawthorne spent one season at the University of the Incarnate Word.

Turner expects Hawthorne to give the team some athleticism that the team lacked previously.

Last but not least, the Racers also welcomed junior guard G’Torria Swinton, another JUCO transfer. Swinton transferred from ASA College-Miami where she played 29 games and averaged 6.4 ppg and 3.7 rpg.

Turner looks forward to a great season with the still young, but very capable team.

“We’re excited, the kids have been working hard, really putting a lot of extra time into trying to work on the things we still have deficits in,” Turner said. “The attitude and effort of this team has been really good and I’ve really enjoyed coaching them.”

The Racers begin the new season at 6 p.m. on Saturday, Nov. 8 at the KFC Yum! Center to take on the No. 9 Louisville Cardinals.