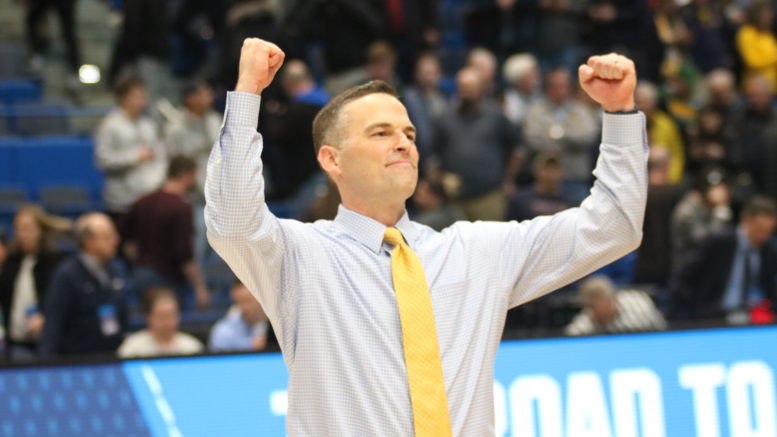 After a year full of highlight passes, dunks, record-breaking performances and the largest NCAA Tournament win in program history, Murray State men’s basketball’s journey toward its third-straight OVC Championship and a trip to the Big Dance is underway.

Filling the shoes of the “bounce bros”

Whether you tuned in to hear Neal Bradley and Kenny Roth call the game or made the trip to the CFSB Center to watch the Racers live, “Morant to Buchanan” became synonymous with Racer Basketball last season.

The two forged a formidable backcourt and a strong Murray State duo reminiscent of the Jonathan Stark and Terrell Miller pairing that led the Racers to an OVC Championship in 2017-18, with the help of Shaq Buchanan and Ja Morant.

The two have both gone on to the NBA, with Morant joining the Memphis Grizzlies after being selected No. 2 overall in the 2019 NBA Draft, and Buchanan signing a deal to join the Grizzlies’ G-League affiliate Memphis Hustle.

Senior guard Jaiveon Eaves and junior forward Devin Gilmore also return to the Racers, as the two were the first off the bench for the Racers down the stretch last season.

Head Coach Matt McMahon is ecstatic to return so many of his players from last season’s championship team and expects them all to become better players and leaders for this year’s team.

“I think those guys are hungry to get the opportunity to do it again,” McMahon said. “Now they have to try and build the program and step forward into bigger roles. I think they’ve put in the time this offseason to be in position to do so. Now we have to go out and get it done.”

While Brown was typically the third option at the guard spot behind Buchanan and Morant last season, McMahon expects him to make a big jump with the amount of work he put in over the summer.

“I think if you look especially at the production in the Bahamas you have to look at Tevin Brown,” McMahon said. “Down in the Bahamas he averaged 22 ppg in 22 minutes, shot the ball off the charts and really impacted the game at both ends of the floor. I expect him to continue that.”

Williams and Cowart filled in nicely last season when Smith went down early with a season-ending injury.

McMahon said you’d never know that Anthony was injured if you watched him right now, and he is ready to be one of the leaders on the hardwood for the Racers this season.

“He’s been relentless in his drive to get back on the floor,” McMahon said. “He brings incredible toughness and competitiveness to our team. He only knows one speed. Whether it’s practice, shootaround, individual workouts, or the game, he’s going to come in and give you everything he’s got.”

Williams’ breakout season surprised many during his freshman year, and he hopes to build on that success this season.

“I’m going to try to help the team scoring-wise,” Williams said. “Last year, I was more like a dump down guy. I was scoring, but not as much. So this year, there’s a big emphasis on me to score more.”

Cowart became a household name for the Racers toward the end of last season, starting the final 13 games. He averaged 10.3 ppg while leading the team in rebounding with 6.5 rpg.

Gilmore also took a step forward last season gaining some crunch time toward the end of the year. Most notably, he stood out in the season finale against Austin Peay, scoring 12 points on 6-for-6 shooting, snagging five rebounds and blocking two shots.

While McMahon is aware of what the team lost after the last season, he isn’t concerned with replacing them.

“We don’t make it about who do we have to replace, it’s about this our team and how do we build this group into the best team we can be,” McMahon said. “I know we lost one of the best players in the world off our team from last year, but we do return about half of our production. It doesn’t guarantee you anything, but it does show that there are some pieces in place and if they’ve done what they were supposed to in the offseason, then they’ll be ready to step in and make a bigger impact this season.”

Along with the many returning Racers, the team welcomes six new players through transfers and incoming freshmen.

The team will also welcome redshirt freshman guard DaQuan Smith, who sat out all of last season with a leg injury.

Meanwhile, the freshman forwards Matt Smith and Demond Robinson will join the returning trio of bigs for the Racers.

Brown believes the balance between incoming players and returning Racers will be a big advantage for them throughout the season.

Last season the Racers faced one of the toughest non-conference schedules in program history, taking on two SEC schools in the University of Alabama and Auburn University.

This season won’t be too far off, taking on the SEC’s University of Tennessee. Along with a matchup with Southern Illinois University, the team will make a trip to the Sunshine State for the Florida Gulf Coast Showcase during the week of Thanksgiving.

In an eight-team field, the Racers will play three games in three days, beginning with a game against the La Salle Explorers on Monday, Nov. 25, at 6:30 p.m. The second game, which will be held on Tuesday, Nov. 26, will either be against Wright State or Weber State.

The final day of play will come against one of four teams: Northeastern University, University of South Alabama, Drake University or Miami University (Ohio).

How will the OVC shape up?

After one of the conference’s most talent-filled years with players such as Morant and Belmont’s forward Dylan Windler being drafted and countless players pursuing a professional career in the G-League or overseas, many teams have big shoes to fill.

The retirement of former Bruins Head Coach Ricky Byrd leads to a new era in Belmont basketball, headed by new Head Coach Casey Alexander, who spent the past six seasons at Lipscomb University.

The Bruins will be without 2018-19 All-OVC First Team selections Windler (21.1 ppg, 10.3 rpg) and guard Kevin McClain (16.2 ppg, 4.2 apg). However, they will benefit from returning last season’s OVC Freshman of the Year in sophomore forward Nick Muszynksi, sophomore guard Grayson Murphy and sophomore Caleb Hollander who all contributed key minutes for the Bruins last season.

Jacksonville State will also look very different from a year ago, as they will be without Jason Burnell (17.2 ppg and 9.6 rpg) and Marlon Hunter (12.7 ppg), the team’s two leading scorers, and Christian Cunningham (8.4 ppg and 7.7 rpg), the team’s second-leading rebounder.

The Racers will open up the regular season when they take on Southern University at 7 p.m. on Saturday, Nov. 9, at the CFSB Center.

Graduate student sees a new side of agriculture