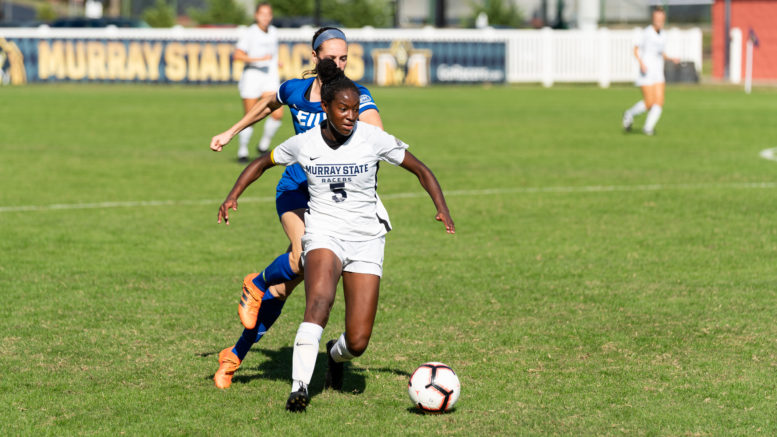 On Friday, Oct. 25, Murray State senior Miyah Watford tallied two goals against Belmont University and broke the University’s record for most goals in a single season.

Watford’s career as a Racer has been capped off by her offensive excellence this season. She currently leads the OVC in virtually every offensive statistic, including shots (77), shots per game (4.28), goals (14), and goals per game (.78). She is also tied for second in the OVC in assists per game with five.

Watford’s excellence is nothing out of the ordinary. She transferred to Murray State after her freshman season. In her first year as a Racer, Miyah scored six goals and was named the OVC Tournament MVP. The following year, Watford’s game continued to improve. She led the team with 10 goals and 84 shots, 40 of which were on goal.

This year, though, Watford has outdone herself, breaking records set by her former teammate  Harriet Withers. Watford says her game hasn’t really changed much; she’s just going the extra mile to hone her skills. She and a few other forwards take some initiative and come in early to work on finishing, an attribute Head Coach Matt Lodge says is better than it’s ever been.

“She’s got a lot better at her finishing,” Lodge said. “She’s put a lot of time in with Coach Jones. It’s starting to really work out for her.”

Lodge counts himself lucky to have been able to coach both Watford and Withers at Murray State.

Lodge admits the experience of getting to coach Watford for three years is a bittersweet one.

“We only got her for three years,” Lodge said. “But on the flipside, she already had a year under her belt. She wasn’t coming in as a true freshman. She came in really as a mature player from an incredible program. She hit the ground running, stepped right in and played almost every minute of her first year. Since we lost [Withers] she’s really stepped up.”

As the season begins to wind down, Watford has done more than enough to have her name thrown around in conversations about OVC Player of the Year. The consideration is an honor, of course, but Watford has bigger things on her horizon.

“It’s pretty exciting,” Watford said. “At the end of the day, it’s a team effort. I’d celebrate it with my team. OVC Player of the Year was the last thing on the list.”

Watford has helped the Racers to two-straight OVC Championships and trips to the NCAA Tournament. Watford set a goal to defend their title and make it back to the biggest stage in NCAA soccer and that has been motivation for her and the team since the first day of the season.

“Just work hard,” Watford said. “Lead the team to another championship, get a ring for my senior year and go out with a bang.”

“Going out” could mean a number of things for the soccer phenom. The question of continuing to play is a reality she is more than open to, but her major in advertising and minor in sports communication will surely open up a whole new plethora of opportunities for her.

“If I get the opportunity to play afterwards, I’d take it,” Watford said. “But I’ve also applied for an internship with the NCAA.”

First and foremost, though, is gearing up for the conference title. The OVC Tournament will commence on Friday, Nov. 1.

‘The Summit: A Teaching and Technology Conference’ draws more than 2,000 educators for virtual keynote speeches and workshops