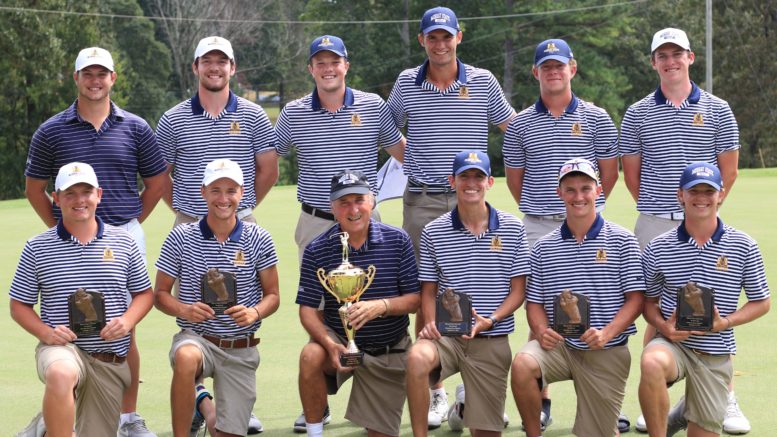 Head Coach Eddie Hunt was thrilled with his team’s performance.

“We played exceptionally well,” Hunt said. “We held on and won by four shots, and that’s what you like to see. We had a couple players step up and shoot some low numbers and it carried us to our win.”

The Murray State team took first place, shooting an 830 as a team. Sophomore Dalton Bagwell paced the Racers with a score of 206, followed closely by junior Conner Coombs with a 208 and senior Austin Knight with a 209. Senior Avery Edwards was just behind with a score of 213, and senior Justin Wendling finished shooting a 224.

The Murray State Invitational awards the top five players the title of “all-tournament.” This year, both Dalton Bagwell and Connor Coombs represented the Racers on the All Tournament Team.

“They both played really solid,” Hunt said. “Conner had a 68 today, which we really needed, and then Dalton shot a 65 yesterday, so as long as we get somebody shooting in those numbers, we’re going to be pretty good.”

Hunt is excited for the season ahead with this group, saying they’re a consistently solid lineup that can shoot low numbers. He also knows that they have some good upperclassmen leading the team in Knight and Edwards.

“We got good senior leadership, also, with Avery and Austin,” Hunt said. “Both seniors have been here for four years and I think they’ll really have a great year. “

This week will be a busy one for the Racers, as they travel on Thursday, Sept. 12, to compete in the Eastern Kentucky Invitational, where plenty more OVC competitors will make an appearance.