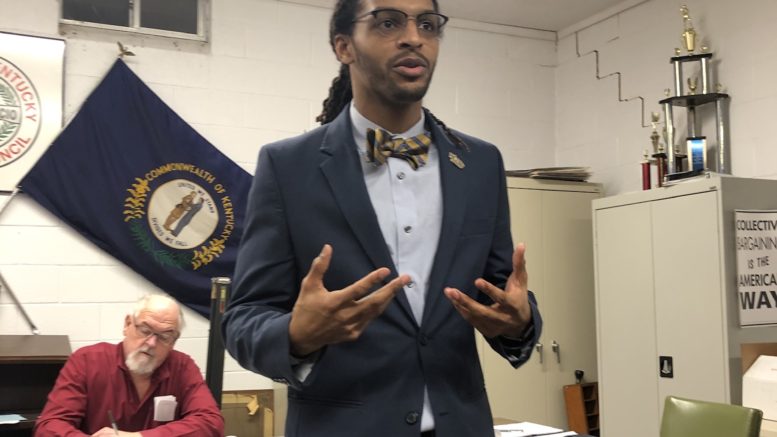 While simultaneously running for state representative, a Murray State graduate has been named assistant principal at Paducah’s new Career and Technical Education Center.

Corbin Snardon, who received his master’s degrees in school counseling and education administration from Murray State, earned the assistant principal position at the Paducah Innovation Hub.

Snardon has been teaching in Paducah since his arrival in the city in 2011. After graduating with his bachelor of science in social studies from Western Kentucky University, Snardon came to Paducah for the first time.

“A large part of what brought me here was that my scholarship director had very close personal ties to Paducah, and they were actively recruiting candidates of color,” Snardon said. “I had never been to Paducah before, but I am so glad that I made the decision to move to a wonderful system.”

After teaching at Paducah Middle School for nine years, Snardon took an interim position as assistant principal at the middle school. According to Snardon, the interim position helped him “learn the ropes of administration” that led him to his new position.

In July 2020, Snardon took his new position as assistant principal at the Innovation Hub. Snardon credits his success to his own determination but also to those who helped him along the way.

“Hard work, a lot of prayer and multiple doses of humility got me where I am today,” Snardon said. “I take my career very seriously and fortunately for me I have had some fantastic mentors along the way who have helped develop me and push me in education.”

Snardon was “super excited” to receive this new position and continue working with students in western Kentucky.  Snardon said that he loves working with kids and young people because he gets to watch them grow.

“My favorite part of teaching is the energy that kids give off and the potential they possess,” Snardon said. “I love seeing kids learn new things and grow.” 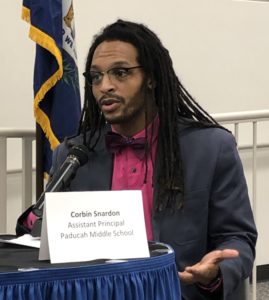 Alongside his passion for education, Snardon is seeking to make a change by running for state representative of District 3. Snardon said he balances running a campaign very carefully with being an administrator.

Snardon was inspired to run for office because he wanted to represent Paducah and diversify Kentucky Legislature. He also thinks it is important to give a voice to education concerns.

Snardon plans to keep his position as assistant principal even if he wins the election. He will be able to maintain this balance because state representatives do not meet year round, only when the Legislature is in session, in committee or special called sessions.

Snardon served on the Maiden Alley Cinema Board, previously Site Based Decision Making Council, for Paducah Middle School from 2012 to 2015 and is currently an Executive board member of the Paducah McCracken Co. NAACP.

Snardon has also received several awards throughout his career including the 2018 NAACP NEXTGEN Leadership Development Program Graduate (Inaugural Class) Leadership Paducah Class #32 Graduate, the 2018 Paducah McCracken County NAACP Member of the Year Award and was a finalist for the 2015 Ashland Inc. Kentucky Teacher of the Year.

In a final statement, Snardon encouraged Murray State students to “register to vote by the voter deadline and vote in this year’s election.”