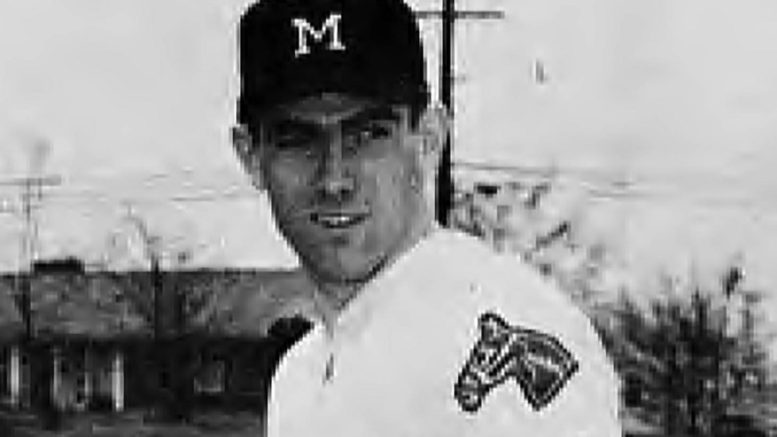 Former Murray State pitcher John Beaton was the first inductee to be revealed for the Hall of Fame Class of 2020. (Photo courtesy of Racer Athletics)

As Murray State Athletics prepares to induct the 38th Hall of Fame Class, the department has announced its plan to reveal all 10 inductees over the next two weeks in alphabetical order.

The Hall of Fame Class of 2020 is the most comprehensive to date, inducting 10 student athletes/coaches from 7 sports with a combined total of 31 Ohio Valley Conference Awards.

Beaton played for the Racers from 1965-66, earning the Co-OVC Player of the Year title alongside Dave Pratt of Tennessee Tech in 1966. The right-hander from Paducah, Kentucky appeared in 12 games and notched five wins over 64 innings. Beaton’s most dominant day on the mound occurred in the form of a game in ‘66 in which he fanned 15 batters in just seven innings.

Beaton got the opportunity to test the waters of the big leagues after being drafted in the seventh round by the San Francisco Giants. He would stay with the Giants for two seasons before playing for a minor-league affiliate of the Kansas City Royals. Beaton’s first season was probably his best in his minor league career, going 11-5 on the mound and maintaining a slim 1.69 ERA. The following season, his ERA increased by more than double (4.05), but he maintained a positive win-loss ratio of 9-5.

Beaton returned to the Racer nation in 1969, hanging up the cleats to earn his college degree before attending and ultimately graduating from Tulane University Law school. Beaton admitted he still thinks about “the old days” at Murray State. Beaton made it clear that he was honored to recognized as a key player in a high point in Racer Baseball history

“The first thing that came to mind was Coach Johnny Reagan and the rush of gratefulness for all the great people that made this happen,” Beaton said. “It got me thinking [that] there were so many people that supported me with encouragement that gave us the ability to play and many of those people are tied to Murray State. Murray State has been a very good family.”

Joining Beaton on the Hall of Fame ballot is Jenna Bradley, a trailblazer in Murray State Athletics. Bradley’s first season at Murray State was also the first year in Racer softball history, with 2010 being softball’s inaugural season. Bradley is the first softball player to be inducted into the Racer Hall of Fame, having been the first of only three players to record a 30/30 season in program history.

Bradley’s selection to the Hall of Fame can be attributed especially to her dominant senior season in 2011, when she was named OVC Most Valuable Player. She was also recognized regionally by the National Fast Pitch Coaches’ Association. In 2011, Bradley hit .353 and drove in 56 runs for the Racers, hitting 18 home runs in the process.

Bradley said she was thrilling to hear the news of her Hall of Fame selection.

“It was an awesome experience to play at Murray State,” Bradley said. “It shows the hard work that you put in during college was all worth it. That was fun, and if I could be 18 again, I would do it all over again.”

The third reveal for the 2020 Hall of Fame class is Tara Isbell, a former goalie for Murray State soccer.

Defending the Racers’ territory from 2007-2010, Isbell came into the college scene ready to play, and was named to the All-OVC Newcomer Team. She started in 11 games in her freshman season, notching four shutouts and ranking fourth in the OVC in goals against average at 1.28. Isbell helped the Racers to the first OVC regular season championship in school history, having been named OVC Defensive Player of the Year and maintaining an incredible goals against average of 0.91. Isbell’s 2008 season was topped off by her total of 87 saves. While the 2008 season was her personal best, Isbell maintained a strong level of play in 2009, starting in 12 games and boasting a 0.98 goals against average. During her senior season, Isbell played in 19 games, tallying 96 saves and eight shutouts.

Isbell said she was more surprised than anything when she heard about her selection to the Hall of Fame.

“I had a good career, but you never think about the hall of fame,” Isbell said. “So since finding out the news, I’ve reflected on those days playing soccer for Murray State and they really were the best years of my life.”

Payne to the Suns, joins Racer Hall of Fame