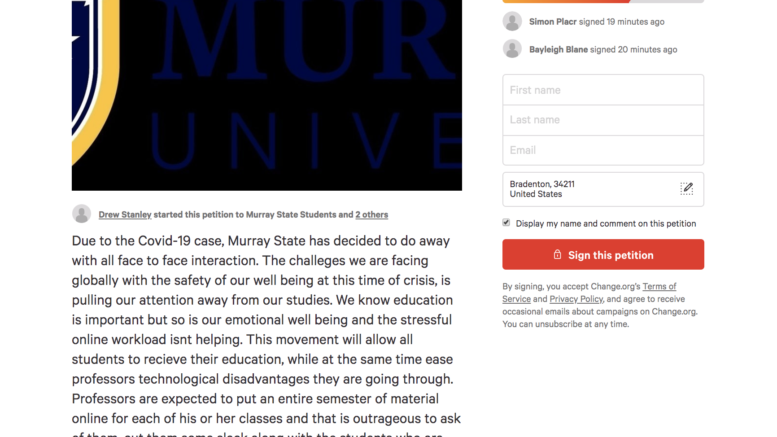 In the midst of many academic changes, a Murray State student started a petition to change the grading criteria to pass/fail grading for the spring semester.

Drew Stanley, sophomore from Paducah, Kentucky, started the petition on Friday, March 20. As of press time, the petition has received over 1,550 signatures.

“This movement will allow all students to receive their education, while at the same time ease professors’ technological disadvantages they are going through,” according to Stanley’s petition. “Professors are expected to put an entire semester of material online for each of his or her classes and that is outrageous to ask of them. [We need to] cut them some slack along with the students who are struggling to comprehend the material and switch the grading criteria to pass/fail grading.”

Trey Book, Student Government Association president and student regent, said he is aware of the petition and has spoken with President Bob Jackson about it.

“For me, I will always support what is in the best interest of the student,” Book said. “I know other schools have implemented this model, but there are exceptions. I believe in this time we cannot be quick to a decision. We need to think through what is best and go from there. This decision is being spearheaded by our very capable faculty and they are doing a fantastic job.”

The News reached out to University administration on Saturday, March 21, for a comment. The story will be updated once a response is given.

Melony Shemberger, faculty regent and associate professor of journalism and mass communications, said while she is personally not a fan of the pass/fail grading criteria, she thinks it is worthy of examination.

“I don’t have an opinion on this at the moment that would reflect the reality of this topic, and I understand the call for this in light of the public health crisis,” Shemberger said. “However, there are some considerations and questions to ask. For those programs accredited by an agency, would a pass/fail system be allowed? For high achieving students motivated by grades, how would such a move affect them? Could there be an option for students and faculty to choose letter grades or pass/fail?”

The change in grading could also affect faculty who have already been working on changing their course content.

“Faculty have worked since March 13 to move their face-to-face courses to Canvas, and some likely have reduced the number of assignments to ease this transition for students,” Shemberger said. “Faculty would need to review their learning objectives and assessment measures to determine whether a pass/fail system is feasible and reflects the work intended for the course.”

Shemberger also said some students put more effort in than others and should be awarded an appropriate grade.

“Many students want to know where they stand academically, and I am one of those students as I work on my third master’s degree,” Shemberger said. “The grade-point average helps to tell this, but pass/fail measures would not factor into the GPA.”

Despite Shemberger’s concerns, she said she understands the equity issues involved and does not feel it is appropriate to make a decision on how she stands at the moment.

Stanley said he appreciates Murray State’s administration and faculty members for trying to provide all of the necessary resources for students to seamlessly continue their education, but he thinks a change in the grading criteria is the next crucial step the University needs to take.

To get the word out, Stanley has shared it on all of his social media platforms and is encouraging others to do the same. He is also encouraging greek organizations and Murray State’s athletic teams to help spread the petition.

Maddy Stewart, freshman from Kennett, Missouri, said she was sent the petition by a friend and is in full support of it.

“Everyone is going through a lot of stress and change right now, and there is so much going on in everyone’s lives,” Stewart said. “I think it is unfair to the students and professors that all of their lesson plans and study habits are having to change this quickly.”

Stewart also said the change is a big concern for students who don’t have access to the internet which could heavily impact their GPAs.

“When we enrolled for classes this semester no one expected to have to figure all of this new online stuff on their own,” Stewart said. “For example, [my friend] has recently told me that she has to find a place to go do her work in a public place in town. That puts her at risk and puts more stress on her because she has to work so hard in a limited amount of time to do her school work.”

The creation of this petition follows the decision by the administration of the University of Louisville to change its grading criteria to pass/fail grading on Friday, March 20. Stanley said he was inspired to start the petition after other universities began to change their grading criteria.

“When I heard this, I thought to myself ‘why not try it,’” Stanley said. “I could be the change the students and professors are looking for in this time of need.”

UofL’s administration made the decision to change after Chidum Okeke, a UofL student, started a petition on Thursday, March 19, similar to Stanley’s. With a total of 3,751 supporters in two days, the grading criteria change was made.

Okeke’s petition similarly states the difficulty professors and teaching assistants will have as a reason for the change. His petition also states the diverse group of students UofL has as a challenge.

“Lectures starting at 8 a.m. in Louisville would require that students living on the west coast be up at 5 a.m. to participate in the class,” according to Okeke’s petition. “For international students who returned home, this means even earlier/later times. We have over 600 international students from approximately 43 countries, and it would be an injustice to discount their academic needs during this crisis. To expect our students to follow a straining regiment in the middle of a semester puts students at academic risk.”

Both Stanley and Okeke highlight the impact the transition to virtual learning will have on student’s mental health in their petitions as well.

Breanna Neal, sophomore from Bedford, Kentucky, is a student at UofL who supported and signed Okeke’s petition. She has decided to convert some of her classes to the pass/fail grading criteria, but she also plans to use the normal grading criteria for others.

“It does give me comfort and security knowing that I won’t have negative repercussions if I don’t do well online in some of my courses, but I’m still going to try my best in other courses because I want a higher GPA,” Neal said.

While Stanley has received a lot of support, he said some oppositions to the change include concerns about how pass/fail grading would not affect students GPAs. Stanley said he thinks this be a positive so students won’t have to stress about maintaining a high GPA.

“To that argument I explain, realistically can a teenage student be expected to learn calculus, OSHA, biology, chemistry and many more daunting skills without the help of an in-person professor,” Stanley said. “The answer is no, it’s impossible, so this grading scale would allow students to deal with these difficult classes and get their education without stressing out about their GPA.”

However, if some departments or colleges have conflicts with their accrediting agencies, students will not be able to convert those courses to pass/fail grading.

Several of those who have signed the petition have also left comments in support of the petition. Andrea Daniels, junior from Belleville, Illinois, left a comment stating the transition to online learning and teaching alone will heavily impact students’ mental health, but adding the stress of maintaining a high GPA will only make it harder academically and other aspects.

“This matters beyond the classroom,” Daniels said. “Many scholarships, fraternities, sororities, academic groups, clubs, etc. require certain GPAs from the students involved. We have already had our semester ripped away. Some students have gotten their graduation snatched from them. It simply would not be right to put our scholarships and groups at risk as well.”

To view the full petition, click here. Stay tuned with The News as we follow how the University’s administration reacts to the petition.