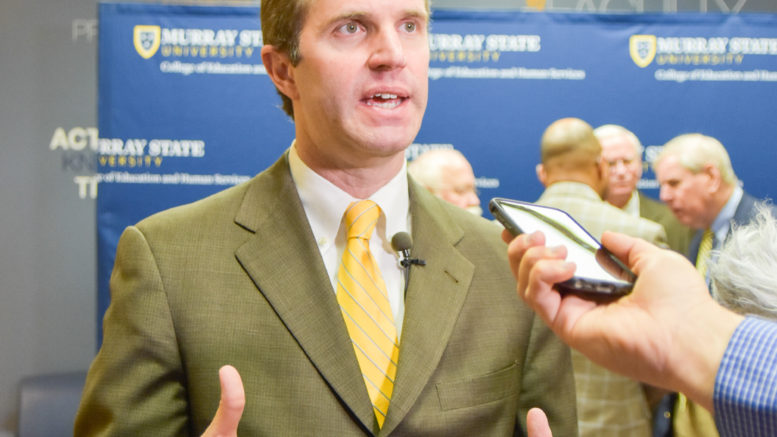 Gov. Andy Beshear follows his visit to Murray State on Feb. 17 with a visit to the Barkley Regional Airport in Paducah on Feb. 24. (Paige Bold/The News)

Following Gov. Andy Beshear’s visit to Murray State on Feb. 17, he visited the Barkley Regional Airport in Paducah on Monday, Feb. 24, to announce a major project for western Kentucky.

Beshear announced a $5 million state contribution which will be made toward a new airport terminal to improve access, enhance the experience of customers and encourage further growth in Kentucky. The new terminal will replace and revamp the existing facilities.

“Airports serve as our state’s ‘front door’ and replacing the almost 70-year-old terminal will make our state more attractive to Kentuckians, visitors and prospective businesses for years to come,” Beshear said. “The new airport will truly open up western Kentucky to the world and help us to build that bigger, brighter future for all our families. When we work together, there is nothing we cannot accomplish.”

The Kentucky Department of Aviation contributed the $5 million in addition to the $20 million in Federal Aviation Administration funding. The combined contributions will go toward building a new 30,000 square foot terminal building with modernized and efficient utilities, ADA compliant bathrooms and security upgrades. Funding will also go toward expanded parking lots, a new entrance road and a new terminal apron.

Beshear was joined by several state officials, local officials and representatives from the business community to celebrate the announcement.

“This is great news for the Barkley Regional Airport and the region,” said Sen. Danny Carroll of Paducah. “Funding to support additional projects that grow our economy will have a noticeable impact on our community, and I look forward to the completion of this project.”

Paducah Chamber of Commerce President Sandra Wilson said she was grateful and excited for the prospects of the project.

“The Chamber develops priorities for state legislation,” Wilson said. “Securing funding for the Barkley Airport project was one of our top priorities because it is so important to our region. We are thrilled this is happening for us and really appreciate the support of Gov. Beshear in making it happen.”

The project is expected to begin in spring 2021 and be completed by the end of 2023.

We didn’t stop the fire