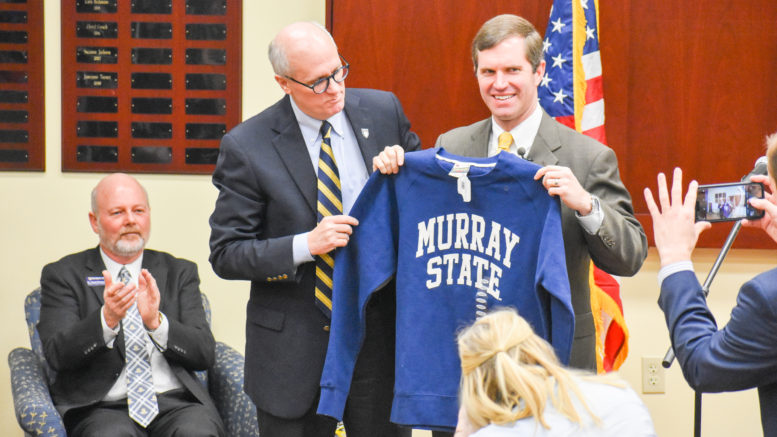 During Gov. Andy Beshear’s second visit to Murray since his inauguration, he spoke to a full auditorium about his new budget proposal and goals for higher education on Monday, Feb. 17.

After a nearly 20-second applause welcoming Beshear to the podium, he presented the highlights of his “education first” budget and spoke proudly of his administration’s proposal in the first two months of his term as governor.

Beshear was presented with a Murray State sweatshirt prior to his speech by President Bob Jackson. Beshear said he would proudly wear it whenever he is in Murray.

“It’s always good to have the governor on campus, especially in the College of Education,” Jackson said. “We appreciate the time that he spent here and appreciate the budget that he has advanced to support education.”

Beshear praised Murray State for its dedication to higher education.

“Every time that you all graduate somebody from here at Murray State or we have a first-generation high school graduate, it changes every generation after that individual going forward,” Beshear said. “And for that, you all deserve a giant thank you.”

The maintenance of universities across the state is one of the main concerns Beshear plans to address.

“For 14 years, we have had to make deep, difficult cuts, each and every year,” Beshear said. “We went way past the fat and cut deep into the bone.”

Amara Stroud, junior from Greenville, Kentucky, said she attended Beshear’s talk and was happy with what she heard.

“I thought he had some good ideas concerning education that I felt were both achievable in a timely manner and relevant to current needs to students, teachers, and higher education facilities,” Stroud said. “I’m particularly interested in his goals for Kentucky’s education and economic opportunities… I really agreed with his statement about the importance of stressing first-generation higher education which starts with strong and supportive public education. I was pleased to hear that this proposed budget was the first in 14 years that didn’t propose cuts to the education budget, which is huge.”

In his budget proposal, which includes no General Fund cuts for the first time in over 12 years, Beshear included a $2,000 raise for all public K-12 school teachers in the commonwealth.

A one percent increase in funding to public universities and full pension funding for the Teachers’ Retirement System is also detailed in the proposal.

“Yes, it’s one percent, but one percent is a start,” Beshear said. “It puts us on the right track to continue funding in the future. You have my commitment that I’m going to continue to try to do that in every budget that I’m governor.”

Beshear also introduced a performance-funding model which his administration has frozen in his current budget proposal, but is anxious to see if the legislature will push it forward. He said public universities currently can’t compete equally to earn the funding, specifically universities like Morehead State University and Murray State.

“If we are gonna have a performance-funding model, which I’m not against, everybody [needs to be] at a place where they can compete before we turn that model on,” Beshear said.

Anticipating the one percent increase in funding, all universities will have the ability to compete in a competitive nature.

Beshear also said the lottery brought in a record amount of money in 2019. According to the Kentucky Lottery’s annual report, $272.7 million was transferred to the commonwealth for scholarship usage. With the revenue, nearly 60,000 students in Kentucky will receive scholarships. He later said an additional 7,300 need-based scholarships were added to help break the cycles of poverty as well.

Elina Fochtman, sophomore from Louisville, Kentucky said she supports Beshear’s “education first” budget because it will enhance educational opportunities for many people. 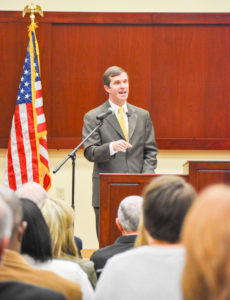 When discussing his new budget proposal, he also said it prioritizes healthcare in both rural and urban areas because he views it as a basic human right.

Since Beshear was elected, he has already defended healthcare several times. During his first week in office, he rejected a medicare waiver that would kick nearly 100,000 people off of their healthcare.

Beshear also said he believes rural hospitals are in jeopardy. A hospital in Ashland, Kentucky closed just a couple weeks ago which cost the community almost one-thousand jobs.

Beshear also said it’s important to be able to see a doctor in local communities instead of having to travel to Louisville or Lexington, or even out of state.

While Beshear has many progressive ideas for education and healthcare, he faces a Republican-controlled legislature. Beshear expects to run into disagreements regarding healthcare and other issues. However, he said he hopes common ground can be found regarding Kentucky children.

“Can we all agree that every single Kentucky child should be covered by some form of healthcare coverage,” Beshear said.

Beshear allocated $2 million toward Kentucky Children’s Insurance Health Plan which is a Medicaid-funded health plan for low-income children whose parents currently earn too much to qualify for Medicaid.

In his new budget proposal, Beshear is also prioritizing the safety of students in school systems across the state.

Because of the tragic Marshall County High school shooting on Jan. of 2018, school safety measures have been increased. To further funding for school safety, Beshear’s budget will fund every single dollar of the physical safety and improvement recommendations made by the Kentucky School Board Association.

Beshear also touched on his transportation budget and highlighted the importance of the Interstate 69 project that will travel through western Kentucky.

“I know a number of local projects along the connector that we’re going to have here,” Beshear said. “It’s gonna make us more and more attractive.”

Beshear plans to push the project forward in his first term as governor as he dedicated $250 million in his current budget proposal.

He ended his talk with a sense of unity, ensuring the audience we are all more than a partisan letter next to our name with hopes that both sides of the aisle will work together.

Beshear’s budget proposal will be discussed in the house and senate until a resolution is agreed upon.

Board of Regents approve prior learning assessment expansion