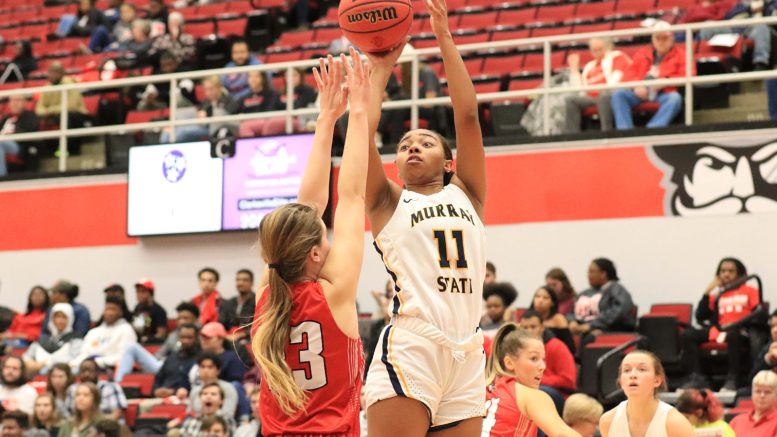 Murray State women’s basketball let its 11 point third quarter lead slip away late in the fourth quarter against Austin Peay as they lost 69-61 in Clarksville, Tennessee.

The Racers led for the first 32 minutes of the game and had firm control before turnovers, poor shooting, and solid play from the Governors late proved otherwise.

“I thought for about 32 of the 40 minutes we hung in there [but] we made some mistakes,” Turner said. “It seemed like whenever they made a run we answered their run, but then turnovers that led to easy baskets and offensive rebounds that led to threes really ended up being our demise.”

Murray State opened the game on an 11-2 run but Austin Peay’s full court pressure was able to force turnovers and the quarter turned into a foul fest towards the end, with the two teams shooting a combined 14 free throws.

Austin Peay would not have been competitive in the first half without the heroics of junior guard Brandi Ferby, who came into the contest averaging just six ppg. She scored seven of the team’s 13 points in the first quarter and added six points in the second quarter to score 13 of the Governors’ 31 first half points.

Junior forward Laci Hawthorne dominated the first half as well, scoring 13 of her 15 points while going 5-for-8 from the floor in the first half.

Despite the team being without sophomore forward Alexis Burpo after picking up two fouls in the game’s first three minutes, Murray State held a six-point lead going into halftime.

The third quarter was a slugfest for both teams, as seven turnovers kept the Racers from getting shots off while the Governors managed to shoot only 3-for-20 overall. Nonetheless, Austin Peay trimmed Murray State’s lead to three points entering the fourth quarter.

The Governors took the lead for the first time all game with just over seven minutes to play with a three pointer by sophomore guard Maggie Knowles. The two teams exchanged baskets before an 8-0 run in the last two and a half minutes sealed the victory for Austin Peay. They would go on to win by eight points.

Turner commended the Governor’s for their impressive and poised play towards the end of the game.

“Give Austin Peay credit,” Turner said. “They made the big plays [and] made the big baskets when they needed to.”

Ferby scored seven more points in the second half to finish with a game- and career-high 20 points (4-9 3PT) to go along with three rebounds and four steals. Turner said players like Ferby capitalize on defensive mistakes.

“She made some big threes for them,” Turner said. “We had some missed assignments on her— going under some stuff instead of going over like we were supposed to. That is what players [like her] do. When you make mistakes, they make you pay. When good players are open, they make shots.”

Senior forward Arielle Gonzalez-Varner, who leads Austin Peay in both points and rebounds on the season, scored 12 of her 18 points in the fourth quarter and also grabbed eight rebounds. Knowles added 10 points and five rebounds.

The Racers were led by Hawthorne, who had an overall solid game with a team-high 15 points along with nine rebounds and four assists. Turner said Hawthorne’s energy and aggressiveness was on display tonight.

“She is very active [and] she plays hard,” Turner said. “She is going to give you her best effort. She is going to go out and play as hard as she can so there is no fault in that.”

Sophomore guard Macey Turley struggled from the field (3-14 FG) but was still able to put up 11 points and tied her career-high in rebounds with seven.

Turner praised the contributions that Blackburn and Swinton brought off the bench in the first half.

“I really want to make sure that I do not get off without bragging about G’Torria and Raegan,” Turner said. “I thought the minutes they gave us in the first half off the bench were crucial in us being able to be in the game. I am just really proud they are able to come out [and] stay focused on the game plan and give us the minutes that they do.”

The Racers fall to 11-13 on the season and slip to ninth in the OVC standings with a record of 4-9. They sit behind Morehead State and Austin Peay, who are tied at 5-8 in OVC play.

Murray State will look to right the ship and keep their OVC Tournament hopes alive as they return home to face off against Morehead State at 2 p.m. on Saturday, Feb. 15.

Freshmen step up against Redhawks, seniors prepare for final game at home