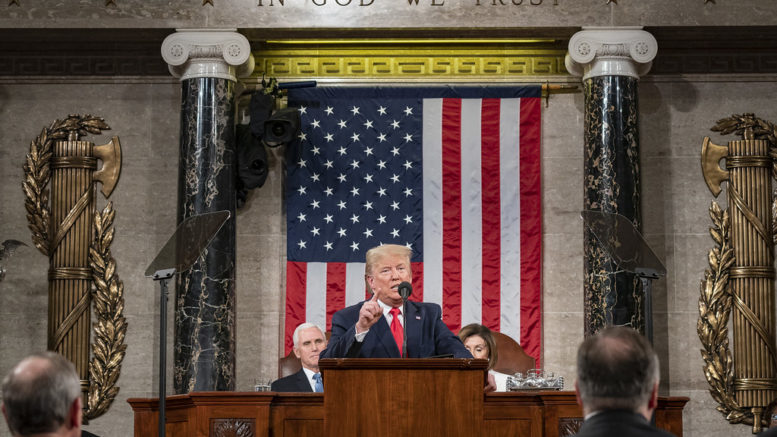 President Trump was acquitted on both charges of impeachment last week, verified results from the Iowa Caucus have yet to be released, and the State of the Union address sparked anger among some congress members.

The first week of February was an interesting week for national politics. President Trump has been fighting his impeachment since House Democrats formally charged him with two articles of impeachment on Dec. 18, 2019.

With a trial to be conducted by the Senate, House Speaker Nancy Pelosi sent the two articles of impeachment to the Senate for a trial. A Republican-held senate opted to prohibit further witnesses and testimony and proceeded to hold a vote as to rather the two charges would find President Trump guilty.

In a press conference, Romney provided an emotional explanation for why he voted the way he did.

“The grave question the Constitution tasks senators to answer is whether the president committed an act so extreme and egregious that it rises to the level of a ‘high crime and misdemeanor.’”, Romney said. “Yes, he did.”

Romney credits his faith for giving him the courage to vote against party lines, citing that he knows that his vote could end his career in National politics.

In a statement from the White House Press Secretary, Stephanie Grisham, the president’s frustration with Romney’s vote was because he did nothing wrong.

Trump will now turn his efforts into the remaining term as President and gear up for battle against the eventual Democratic nominee for President.

Every four years, Iowa has the right to take great pride in being the first primary of the election cycle. This year was no different until the chaos of caucus night ensued.

History suggests that candidates who do well in the first three primary elections typically become the nominee for a party. That makes Iowa a huge momentum state to kick off the campaign trail.

Unlike a normal primary where voters go to a polling location and cast a vote and a winner is announced at the end of the night, a caucus is usually a day-long process where voters meet at their respective precinct voting area and argue which candidate they think deserves the nomination.

Depending on how people align by the end of the night, delegates are given to each candidate which will eventually cast another vote at the party’s national convention where a nominee will be chosen to run for the general election.

Given that President Trump is running for re-election on the Republican ticket, Democratic voters had to choose between 11 candidates currently seeking the nomination.

As voters arranged themselves throughout the night with their ideal candidate for the nomination, election results became much anticipated by media coverage.

Iowa Democratic officials chose to integrate a smartphone application into vote counting and reporting this year, different from the program they used in 2016 from Microsoft.

The application was a start-up built by a partisan progressive start-up company named Shadow Inc., according to CNBC. It was managed by a nonprofit investment company called Acronym.

Media companies covering the caucus began to panic as results were not being reported in a timely manner as they were expected to be.

Iowa Democratic officials claim a coding error occurred in the application and has since been addressed and fixed, but verified results remain unclear as to who won the caucus.

The application was sent to a Massachusetts-security firm Veracode for investigation. The investigation concluded that the application lacked simple transmission protections which could have caused data to be intercepted or changed.

Chris Wysopal, Veracode’s chief technology officer, said the application was elementary and should not have been released prior to extensive security testing.

“It is important for all mobile apps that deal with sensitive data to have adequate security testing, and have any vulnerabilities fixed before being released for use,” Wysopal said.

Nevada Democratic caucus officials planned to use the app for the third national caucus but will now seek an alternative method for tallying votes.

Preliminary Iowa caucus results show the Mayor of South Bend, Indiana, Pete Buttigieg receiving 26% of the vote and earning himself 13 delegates to carry into New Hampshire. Shortly behind, Bernie Sanders, a senator from Vermont and 2016 democratic presidential hopeful received nearly the same amount of the vote as Buttigieg, earning himself 12 delegates.

The New Hampshire caucus was held Feb. 11. Results show Sanders winning the caucus by a small margin to Buttigieg, but the two both earned 9 delegates, as they look ahead to the Nevada caucus on Feb. 22.

State of the Union Address

On Tuesday, Feb. 4, the nation heard President Trump deliver the annual State of the Union Address on all major news networks.

Trump’s speechwriters crafted a speech that gave him the freedom to boast his accomplishments, present many feel-good moments to the members of Congress, but also to hit his opponents with his policies.

Perhaps the most memorable highlight from the address was the end.

House Speaker, Nancy Pelosi (D-CA) tore a copy of Trump’s speech in half on national television after Trump concluded the address with a standing ovation.

When she was asked by reporters why she tore up the speech, she responded by saying that there were other things she could have done with it.

“It was the courteous thing to do, considering the alternative,” Pelosi said.

Much of the controversy that surrounds Pelosi stems from the positive highlights that came from the address she mocked.

Trump reunited a soldier who had been deployed for much of the past year with his wife and two children in surprise fashion. He awarded Rush Limbaugh, a conservative radio host, who was diagnosed with advanced-stage lung cancer only a day before the address, the presidential medal of freedom, the nation’s highest civilian honor.

He recognized the recently turned 100-year-old Tuskegee Airman, Charles McGee and his great-grandson Iain Lanphier, an eighth-grader who aspires to join the recently created Space Force.

Trump explained that Stephanie Davis, a single mom who was unable to send her daughter to the school she wanted to attend because Pennsylvania’s Governor, Tom Wolfe had vetoed a bill that focused on school choice, would receive a scholarship that would allow her daughter to attend where Davis wanted her too.

Venezuelan opposition leader, Juan Guaidó was also in attendance for the address. The socialist dictator of Venezuela, Nicolás Maduro remains in power of Venezuela, but Guaidó continues to pressure Maduro to release his power to the people of Venezuela.

“Please take this message back that all Americans are united with the Venezuelan people in their righteous struggle for freedom,” Trump said in a message to Guaidó while receiving a standing ovation from the crowd as well as Speaker Pelosi.

According to CNN, the vast majority of people who watched the State of the Union address (76 percent) had a “positive” or “very positive reaction.”

Looking forward, Republicans are optimistic that their re-election chances are bright as the race for the Democratic presidential nomination heats up in the coming months.

Watch out for Rick Santorum

Can Mitch McConnell lose in Kentucky?

Racers for Bernie find a niche in the student body