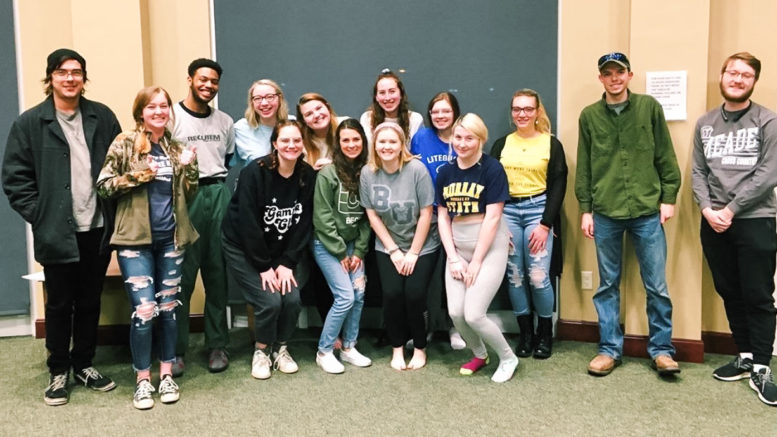 On Jan. 29, Ashlen Grubbs held a Sunrise Movement launch party with the help of Tyler Hill
from the Kentucky Student Environmental Coalition to kick off the creation of a climate change
movement at Murray State.
Grubbs, sophomore, is heading a local chapter of a national political organization called the
Sunrise Movement. Sunrise focuses on making the political changes necessary to save the planet.
“There is so much at stake, that’s clear, but there’s also so much work to do,” Grubbs said.
Grubbs, a long time political activist, said she was inspired to bring Sunrise to Murray by a
friend at Western Kentucky University.
“My friend Rachael told me about this amazing opportunity she had with this group called the
Sunrise Movement.” Grubbs said, “She said for the first time in her life she had found a way to
have her voice be heard alongside a community fighting for change.”
After hearing her friend’s testimony, Grubbs decided to take action into her own hands. She
immediately took initiative to create a localized Sunrise Movement that could bring passionate
collegiates together.
“I just thought, ‘I keep saying I care about climate change, but not doing anything active,’”
Grubbs said. “I believe the scientists. I wanted to make a change, so that’s why I’m here.”
Sunrise Movement’s main focus is getting a Green New Deal passed into legislation. This bill
would be an environmentally focused version of the New Deal that brought the United States out
of the Great Depression in 1933.
The New Deal focused on creating jobs and rebuilding infrastructure, and the Green New Deal
would do this as well while focusing on building a sustainable environment.
“We need this year to begin the decade of the Green New Deal,” Grubbs said. “The Green
New Deal is a society-wide transformation to stop climate change and create millions of new
jobs in the process.”
At the launch party, Grubbs played two exclusive never-before-seen Sunrise Movement films.
These films were played simultaneously across the country as 2,500 other Sunrise Movement
launch parties happened nationally.
The films focused on how the Sunrise Movement was formed, its purpose and how you can
get involved with the movement.
The three steps to involvement are organize, vote and strike. Grubbs, who already took the
initiative to organize, spoke about the importance of voting for climate conscious officials.
“We could be in for four more years of fossil fuel billionaires polluting our air and water, and
four fewer years that we have to tackle the greatest existential threat that humanity has ever
experienced,” Grubbs said.
The final step, strike, is Grubbs’ next plan of action. In conjunction with thousands of others,
Grubbs will be leading a Sunrise strike on Earth Day.
Members of the Sunrise Movement plan to “take back” Earth Day on April 22 to focus on the
meaning of saving the planet. With predictions saying we have 12 years left to stop irreversible
climate change, the organization feels there is no better time to act than now.
“Scientists have been clear,” Grubbs said. “We can not afford another four years of inaction
on the climate crisis. That will be a death sentence for millions of people.”

Grubbs will be holding meetings every Wednesday at 9 p.m. in HC Franklin College.
If you are interested in participating in the strike circle and getting involved with the Sunrise
Movement you can contact Ashlen Grubbs at agrubbs4@murraystate.edu.