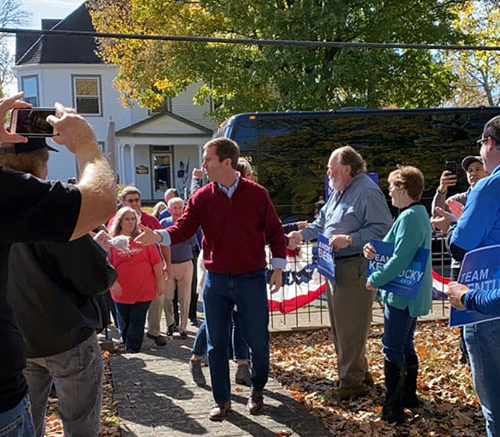 The Kentucky Education Association is supportive of Beshear’s budget. Through this budget, Beshear is upholding his promises to make public education a focal point of his administration’s policies.

House Minority Floor Leader Joni Jenkins tweeted that the governor laid out a bold plan for Kentucky, saying that there are many good things in the budget, including education, health care and K-CHIP.

In his budget address, the last 14 years of budget cuts “did not just ‘cut the fat,’ they went deep in the bone…” Gov. Beshear said.

In a tweet, Kentucky Senator Robert Stivers said, “we haven’t been included in this,” and that “there’s a certain sense of skepticism” about the proposal. “This was all puppies, puppy dogs and rainbows,” Stivers said.

“My hope, moving into the future, is that we can embrace full expanded gaming to compete with Indiana, Ohio and the rest of our neighbors—Republican-led states that are taking Kentucky dollars,” Beshear said.

James Clinger, professor of political science, said the governor is assuming an increase in revenues and overestimates the revenue that gaming will produce. These gaming revenues from games shouldn’t be treated as reoccurring revenues.

“The governor thinks the budget that he has proposed will keep us moving forward in paying down our unfunded pension liabilities.”

Beshear said the states with the highest wages have the best-educated populations, so an investment in education will change Kentucky’s future. This investment starts with teachers.

A tweet by Bluegrass Politics said Beshear got the most applause after offering a $2,000 raise to teachers. This raise reinstated the loan forgiveness program and teacher scholarship program.

“This proposal provides state employees a raise,” Beshear said. “That raise is one percent in the first year and another one percent on top of that in year two…this budget fully funds the pension plans.”

In a public statement, KEA said public employees have gone years without any meaningful pay increase, and at the same time, the cost of health insurance has risen each year. Many education support professionals who work in Kentucky’s public schools are not paid a living wage, so without a new source of revenue, Kentucky cannot hope to make more progress.

The education-first budget invests heavily in K-12 education, ending the cuts to our public universities and community college system.

Clinger said that over the years there have been significant increases in most budget categories since the recession of 2007, but the progress has been slow and the budget has taken time to recover. Beshear assumes that the state has already recovered from the recession.

“He [Beshear] is supporting more gaming, higher taxes on cigarettes, a new vaping tax and a higher minimum tax on limited liability corporations,” Clinger said. “He is proposing more money for education and health care, but those were the big-spending categories before he took office.”

Beshear said public education is the key to breaking the cycles of poverty, and that every individual attaining new levels of education can change the lives of their children.

“…this budget devotes millions in lottery revenues for student financial aid,” Beshear said. “The lottery brought in record revenues in 2019 and with that additional revenue, we’re going to be able to provide scholarship dollars for nearly 60,000 students, including 7,300 more need-based students than in the last biennium,”

Clinger said the proposed budget will provide the 1 percent to the universities and fund some scholarship programs, but that it’s far less than what the state schools have requested. Clinger is unsure if the legislature will appropriate as much as Beshear proposed.

“Everyone wants to think about the short term but the long-term mismatch between future revenues and financial obligations is scary,” Clinger said. “It is only a proposal, not a reality.”