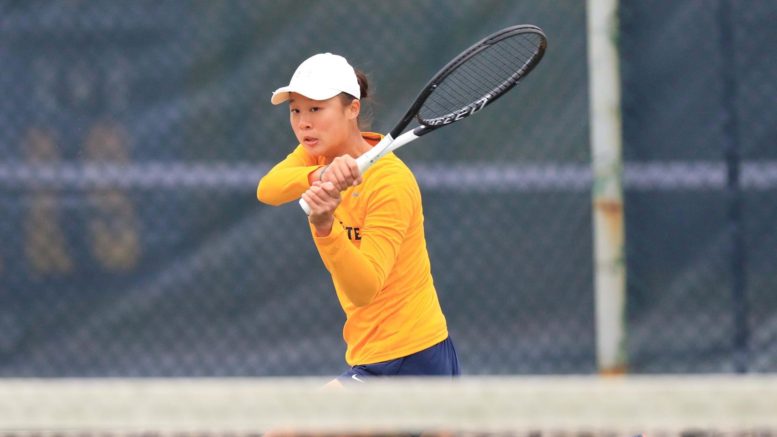 The Racers followed up the opening weekend on Thursday, January 1 with a split, losing to Middle Tennessee University 5-2 before beating Cumberland University 6-1.

Despite the loss at the beginning of the day, Head Coach Jorge Caetano was impressed with the Racers’ strong start against the formidable Blue Raiders, who have beaten the Racers in every matchup since 2006.

“They [Middle Tennessee] stepped up when they had to,” Caetano said. “We won the doubles, and for the first time we had it in our eyes that we could win, but we lost three matches in the third set, and lost five-two, so if two of those matches go our way, we win four-three. The girls battled, played really well, and [Middle Tennessee] took it from us.”

Doubles started out strong against the Blue Raiders. Seniors Sara Loncarevic and Anja Loncarevic took a victory with a score of 6-4, while freshman Marit Kreugel and junior Sara Bjork earned a 7-5 win. The doubles scoring wouldn’t take the Racers far enough, however, as the Blue Raiders were able to come back and take the overall victory.

Coming off the loss earlier in the day, the Racers geared up for the late show by turning up the heat against Cumberland University. Bjork and Kreugel took care of business in doubles once again, routing their opponents 6-0. Anja Loncarevic and senior Claire Chang matched pace with a 6-2 win.

Looking back on the outing, Caetano was pleased with Chang’s comeback after a slow opening day.

“Claire had a really tough weekend last week,” Caetano admitted. “[She] didn’t play really well, so this week we worked on all her stuff. She struggled a little bit in practice. But today seeing her play at the level—that’s what we need from her. She’s been playing number one all four years [and] she’s a senior now, so it was good to see her competing.”

Caetano also commented on Kreugel’s incredible start. The 17-year-old freshman remains undefeated through the first four matchups of the spring, and hopes are high for what else she might accomplish in the future.

The Racers will spend the coming days gearing up for a matchup against Missouri State University in Springfield, Missouri on friday, Feb. 7.

Racers split weekend to move to 3-3

Tennis goes to round 16 in regionals