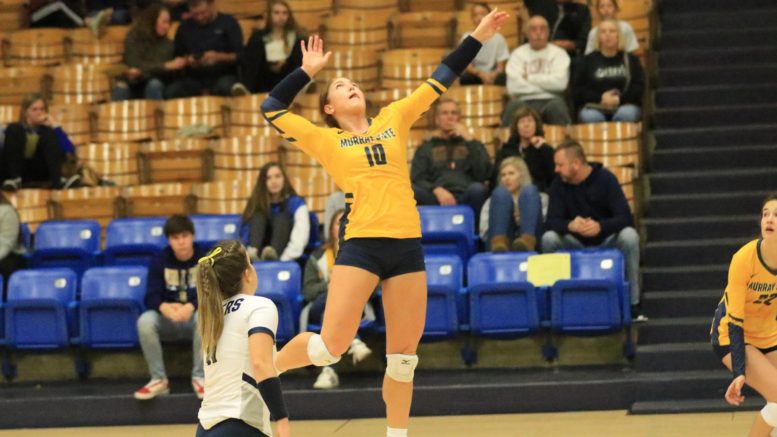 Giustino goes up to spike the ball at Racer Arena. (Photo courtesy of Racer Athletics)

The American Volleyball Coaches Association (AVCA) named Giustino to the Midwest All-Region Team on Dec. 10, 2019. She is the fifth Murray State volleyball player to be named All-Region and the first since Scottie Ingram in 2016.

Giustino felt grateful to be named All-American and Midwest All-Region, attributing her success to her team and university.

“I couldn’t have accomplished that without my amazing university and team and coach and everything behind me,” Giustino said. “I mean, it’s exciting. It’s kind of a nice little capstone to my career here at Murray State.”

These honors follow Giustino being named OVC Player of the Year and All-OVC First Team on Nov. 20.

Giustino dominated the 2019 season, setting a new single-season record with 610 kills. Moreover, she became Murray State’s career leader in total kills on Nov. 1 in a match against SIUE and ended the season with 1,764 kills. Giustino averaged 5.35 kills per set, the third best in the country this year. She also was second on the Murray State team in digs with 345 and service aces with 29.

Giustino is driven to play at such an outstanding level by her desire to help her team succeed.

“Part of something I’ve learned just through sports is that it’s not about what you have to get from it, it’s what you have to give and thankfully I had a lot to give this season,” Giustino said. “I really love my team and I love my school and I loved the opportunity to play with these girls. I just felt like I had the ability to give them everything that I had.”

Even after Giustino moves on from Murray State, she will never forget her experiences here.

“I could not be more amazed and surprised by the time that I’ve had here,” Giustino said. “I couldn’t have asked for, like, a better small town in the middle of nowhere to be like a place that I’ll forever feel is a little bit of my home.”

Giustino helped the Racers win two OVC Championships and make two NCAA Tournament appearances, to go with a record of 86-39 in her high profile four-year under Head Coach David Schwepker.

Racers set to take on pair of SEC schools