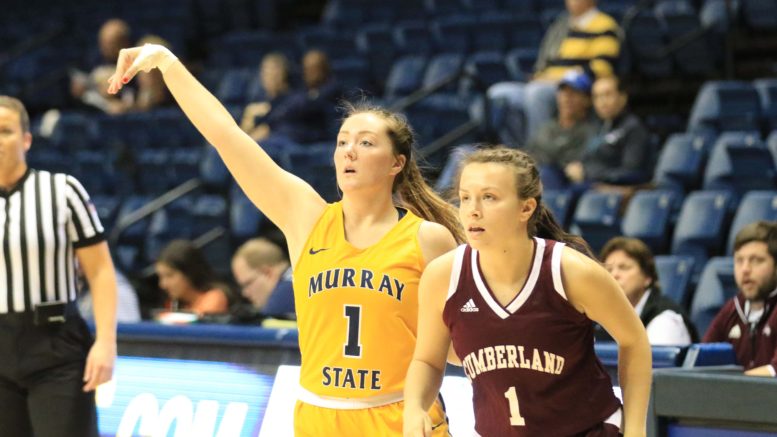 The Murray State women’s basketball team got back into the win column on Saturday after a dominant 93-60 win over Cumberland University at the CFSB Center.

After having a short break off for Christmas to regroup following two consecutive losses, the Racers charged out of the gate with a strong 37-point first quarter.

“Our coach really emphasized effort to us because she said we didn’t play our hardest against Samford, which was true,” Hawthorne said. “I think we just tried to focus on that mainly, just our effort.”

Murray State was able to capitalize on Cumberland’s 24 turnovers by scoring 37 points off turnovers as well as 13 fastbreak points. The Racers out-rebounded the Phoenix by 11 and had 19 second-chance points.

The Phoenix put the first points on the board but were quickly outscored after the first minutes. The Racers led 21-6 midway through the first quarter and had four consecutive inbound steals toward the end of the quarter to propel the Racers’ lead to 22.

Murray State cooled down in the second quarter and shot only 7-for-22 but Cumberland did not fare much better, only attempting 14 shots and hitting five of them. The Racers led 55-31 at the half.

The second half was more balanced, with the Racers only outscoring the Phoenix by nine.

Cumberland made some changes at halftime and outscored Murray State 17-15 in the third quarter to decrease the Racers’ lead to 70-48 entering the fourth quarter.

Turner said this game was about getting back into shape following Christmas break and gaining confidence heading into conference play.

Senior forward Cekeya Mack had a strong showing, tying her career-high in points and rebounds with 13 (6-for-10 FG) and nine, respectively. Hawthorne also scored 13 points and grabbed eight rebounds.

Sophomore guard Macey Turley continued her impressive season with 12 points and four rebounds, and she tied her season-high in assists with eight. Sophomore guard Reagan Blackburn scored all 12 of her points from behind the arc, shooting an efficient 4-for-10.

Turner said Blackburn’s three-point shooting provided a spark off the bench that will be beneficial to the team going forward.

“I thought Reagan came in tonight and showed that she can come in and give us some offense and be able to give us some minutes,” Turner said. “When she shoots 40% from three each night, that’s 12 points that she gave to us, so we’re gonna have to have that.”

The Racers will be without freshman guard Jentri Worley for the remainder of the season following an injury in practice that originally appeared to be minor.

“She fell in practice and we weren’t really concerned about it at first,” Turner said. “She went to see Dr. Blalock and she had some broken cartilage in the back of her knee. She’s a freshman so you don’t want to take any chances of further injuring that.”

Turner knows the team’s stretch of 18 games against OVC opponents will be tough.

“Our conference start is tough,” Turner said. “In the first six weeks we play all but one team ranked ahead of us in the preseason. It’s going to be a grind. We just have to figure out a way to get through it.”

Turner believes preparation for this stretch will lead to success.

“I told the girls after the game, ‘The reason you come to play at Murray State is to win an OVC championship,’” Turner said. “That has to be the goal. We have to be mentally and physically prepared.”

The Racers will look to start the new year off with a win over rival UT Martin on Thursday, Jan. 2, at 5 p.m. at the CFSB Center.

Secretary of State Grimes to discuss civic health in Murray