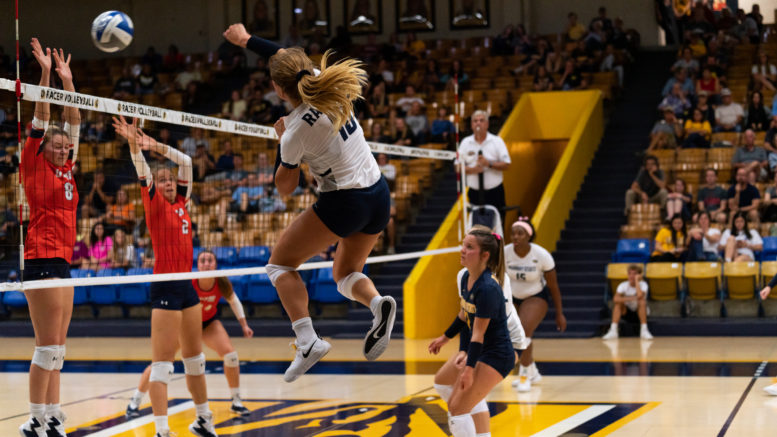 Senior outside hitter Rachel Giustino added to an already astounding performance this season by setting a new Murray State volleyball record for most kills in a career on Friday, Nov. 1, in Murray as the Racers defeated SIU Edwardsville 3-1.

Giustino scored 28 kills against SIUE, putting her at 452 kills for the season and 1,606 kills during her career.

Previously, outside hitter Scottie Ingram held the record when she finished her Murray State career in 2016 with 1,598 kills. Ingram and Giustino played together on the 2016 team.

After setting the record, Giustino shared her thoughts on her accomplishments and overtaking Ingram’s record.

“It’s just an honor to help my team like that,” Giustino said. “I played with Scottie my freshman year and she was an incredible player, and so to be up in that caliber is just really an honor for me.”

“That’s absolutely incredible,” Schwepker said. “I mean, Murray State volleyball has been around forever. The fact that Scottie Ingram broke the school record a few years ago… and now we have another girl breaking that record, that’s just unbelievable. Rachel’s just a special, special player and we’re so proud of her and she’s worked to get where she is and she’s done a lot for this program and is still going to do a lot for this program. So, we’re happy, very happy for her.”

On Nov. 2, Giustino scored 20 kills against Eastern Illinois University to push her to 472 kills this season, beating her career-high last season of 470 kills. She ranks third in total kills this season in the NCAA. Moreover, Giustino now has 1626 kills for her career, with at least five matches left to play.