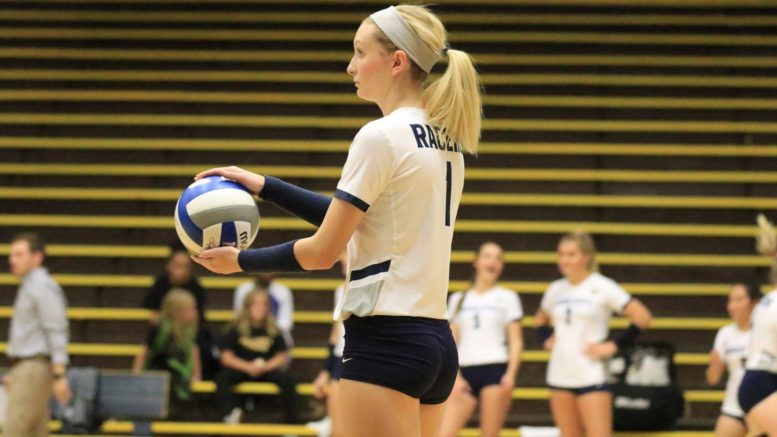 Rachel Holthaus gets ready for the next point. (Photo by courtesy of Racer Athletics)

Returning to Racer Arena for the first time since Oct. 5, Murray State volleyball swept homecoming weekend to improve to 12-8.

Sophomore middle blocker Kolby McClelland and sophomore outside hitter Emily Matson led the Racers in kills, both scoring 14. Senior outside hitter Rachel Giustino followed closely behind with 11. Junior setter and outside hitter Ashley McBee made 31 assists, and junior libero Becca Fernandez made 22 digs.

The Bruins opened the first set with a 2-1 lead before two kills by Matson and a kill by McBee propelled the Racers to 5-3. The Racers extended their lead to 15-8 with three kills by Giustino, three kills by McClelland and a kill by junior middle blocker Katirah Johnson. Belmont closed the gap to 20-16, but the effort did not stop Murray State from taking the set 25-19.

The Racers started the second set with two kills by McClelland and managed to jump to 4-1. Belmont made a comeback to take the lead 6-5, but kills from Giustino and Johnson put the Racers back on top 10-8. The teams played neck-and-neck, tying the game at 13 and then at 17. Two kills by Giustino and a kill by senior right-side hitter Rachel Holthaus gave the Racers momentum going into the end of the set, advancing Murray State to 23-18. A kill from McClelland and a kill from Matson gave the Racers their second set of the night 25-19.

Murray State quickly gained a 3-1 lead to open the third set and continued to dominate Belmont by pushing the score to 12-4 before the Bruins could find a response. The second half of the set saw numerous Racers score, as Matson, Giustino, McClelland, Holthaus and McBee all made kills. The Racers won the third set 25-9, giving Murray State a 3-0 victory over Belmont.

Following Murray State’s victory, Fernandez provided her thoughts on how the fans helped energize the Racers.

“Homecoming Weekend’s always big,” Fernandez said. “We always have a lot of people here and it’s always great to play in Racer [Arena] because we have super loud fans and a really good crowd, and it really hypes us up for all the sets we play.”

Senior right-side hitter Rachel Holthaus led the Racers in kills with 17, while junior setter and outside hitter Ashley McBee made 34 assists and junior libero Becca Fernandez made 17 digs.

The Tigers scored two points to make it 10-7, but the Racers gained momentum and pushed the score to 16-7. Murray State went on to take the set 25-12.

Tennessee State scored three points to make it a 10-6 game, but Murray State quickly responded with kills by senior outside hitter Megan Lindsay and Matson, making the score 13-6.

The Racers continued to dominate in the second half of the set, as kills by Giustino, Kinney, Holthaus, Matson and Lindsay helped Murray State take the set 25-16 and allowed the Racers to sweep the Tigers 3-0.

“We had a bad loss last weekend, as everybody knows,” Schwepker said. “So, we worked our butts off this week in practice, worked on some things that we haven’t been doing well. Really focused in on that, and it paid off.”

Following the game, Holthaus commented on what the Racers improved on going into tonight’s game.

“Our keyword this week was “urgency,”” Holthaus said. “We haven’t had the urgency in our two losses that we’ve had, and so in the timeouts that we were given, we were like ‘we just have to keep pushing and keep going.’”