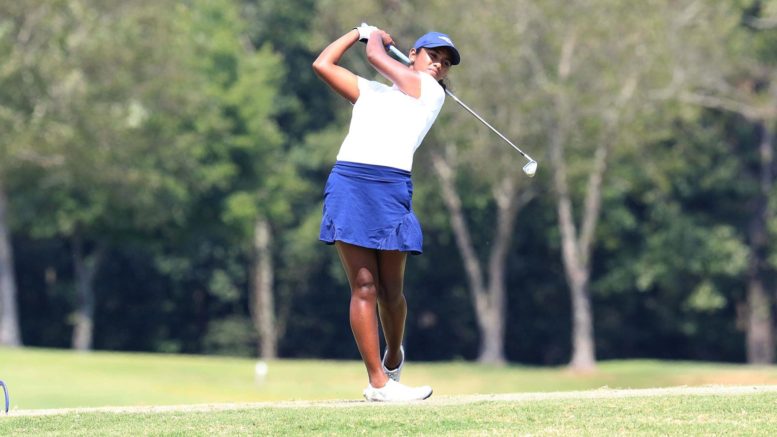 On Friday, Sept. 27, Murray State Women’s Golf went to the University of Kentucky to compete in the Betty Lou Evans Invitational, finishing 11th out of 13 overall.

The Racers finished the first day of competition with an overall score of 311. Leading the way was freshman Ana Garcia Picchi, who made a name for herself in the opening tournament two weeks prior to the Invitational when she shot 215 and achieved seventh place overall. On the first day of the invitational, Picchi stayed true to her precedent and shot a 75, holding 24th place out of 75 competitors. Senior Raeshya Surendran was only a shot behind, coasting into 33rd place with a score of 76.

At 8:30 the next morning, the Racers came out looking to close the distance. Over the course of the day, the Racers chipped off 11 strokes, shooting an overall 300 on the day and 611 over the first two rounds of play. They found themselves in 11th place, sandwiched between Indianapolis in 10th place, shooting 604, and Marshall in 12th, shooting 618.

Surendran took the front for the Racers, shooting 74 for a total of 150 over two days of play. Picchi slipped one shot and fell just behind her older teammate. She finished the day with a 76, placing 29th at the end of the second round.

At 9 a.m. on Sunday, Sept. 29th, the Racers began the last 18-hole round of the tournament. They continued to make progress, and although they finished 11th overall, they knocked off another four shots from the previous day’s performance. The Racers finished with an overall score of 907.

Yet another Racer claimed the low round on the final day of play. Sophomore Sarah McDowell, who was placed 54th by the end of the previous day, shot a 2-under-par 70, pushing her all the way up to 37th place.

Surendran proved herself to be the most consistent Racer in the event, shooting a line of 76-74-75. She was the only Racer to crack the top 30, finishing the competition at 29th place. Picchi was not far behind and chalked up a final score of 228, placing 44th overall.

Lucila Puente Rodriguez de Austria, who participated individually in the competition, took nine strokes off her previous round and shot 74 in the final day.

Head Coach Velvet Milkman was pleased with the steady improvement her team made over the course of the tournament.

“I was pleased that we got better everyday,” Milkman said. “Really, our first day put us in a position to not do very well. It’s good to make some adjustments and to work on those and see it pay off the next day.”

Milkman was impressed that a different Racer shot low every round.

“I think all of them played well at times,” Milkman said. “They all played well in spurts, which means they can all go low.  Sarah shooting 70 the last day was good as well. They can do it, we just got to be a little more consistent.”

The Racers will travel to Jacksonville State University to play in the Chris Bannister Classic on Monday, Oct. 7.

Rifle wins out at Buckeye Open

Racers off to best conference start since 2013